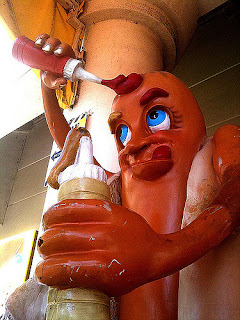 I had this friend named Big Norm back in college. Sometimes he misunderstood lyrics to popular songs. Sometimes I think he did it on purpose. For instance, at the dawn of the disco scourge, Big Norm thought that the spoken refrain of Van McCoy's "Do the Hustle" was "Eat a Hot dog!"

Goofy, I know. But sometimes when I'm craving a good old American frankfurter, deep in my skull I hear Van McCoy's music and Big Norm's voice telling me what to do.

And sometimes I think of some of the great American songs about hot dogs posted below. Except some of these might not actually be about food, per se.

Let's kick it off with a rockabilly classic by one Corky Jones, which was a pseudonym for the one and only Buck Owens. (Back in the '50s, Buck tried to conceal his identity as not to offend his country fans. But by the end of the 80s he re-recorded this song under his own name and made it a title song of one of hi last studio albums.)


In the mid 1920s, Butterbeans & Susie always had hot dogs on their menu.

Bessie Smith had a similar idea a few years later.

Then there was Hasil Adkins

And this song by The Detroit Cobras practically could be the theme song for the American Wiener Institute.