If you want to get an accurate portrait of mental health problems and psychiatric institutions, don't go looking at popular songs about the subject.

The following tunes aren't exactly what you'd call enlightened. Most of them are based on cruel stereotypes and weird assumptions about psychological problems.

So if you don't like dark humor, just consider this a historical look at old attitudes.

And please don't call the men with the butterfly nets.

Let's start with a jazzy classic, "Twisted" by Annie Ross, which I first came to by way of Joni Mitchell (whose version on Court & Spark included a cameo from Cheech & Chong.) But I prefer this video of Annie on Playboy's Penthouse backed by Count Basie.

"Insane Asylum" is a classic blues duet of Willie Dixon and Koko Taylor.

Behold a live performance of my very favorite Alice cooper song: "The Ballad of Dwight Fry."

Here's a song my crony Gregg Turner originally performed with The Angry Samoans, This is a more recent version of "I Lost My Mind."

Turner's actually the one who turned me on this next song more than 20 years ago. He said he first heard it done by Elvis Costello. But it was written by country giant Leon Payne, best known for writing "Lost Highway" for Hank Williams. This version is by country singer Eddie Noack.

But the major country classic of craziness is Porter Wagoner's somewhat autobiographical "The Rubber Room."

On his final studio album, 2007's Wagonmaster, Porter revisited his "rubber room" days with this moving song, "Committed to Parkview," which was written by Johnny Cash.

My favorite madhouse music in the realm of hip hop is The Geto Boys' "My Mind's Playing Tricks on Me."

Finally some of you longtime readers probably expected me to include Napoleon XIV's mid '60s smash "They're Coming to Take Me Away, Ha Ha" in a blog post about loony-bin songs.

But that's just too predictable. Instead, let's flip out and play the flip-side of that hit record, one I've never hear played on the radio. It's called "Aaaaah-aah Yawa em Ekat ot Gnimoc Re'yeht," which is "They're Coming to Take Me Away, Ha Ha" played backward. Caution: You might hear the voice of Satan in this early example of backward masking. 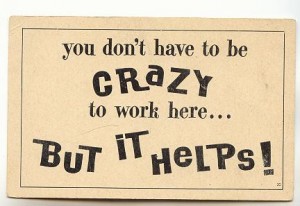