TERRELL'S TUNE-UP: The Wigged-out World of Off Label Records

A version of this was published in The Santa Fe New Mexican
February 26, 2016 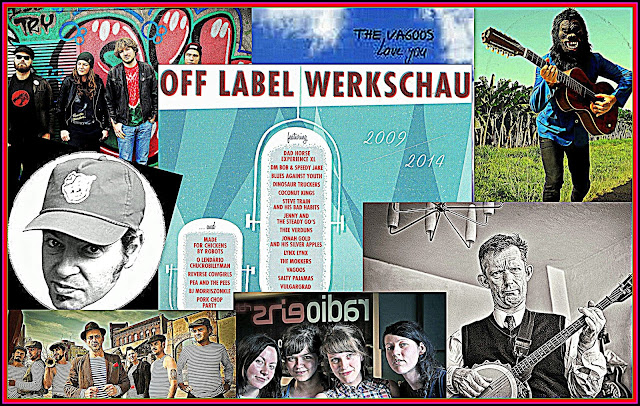 I don’t know how many times I’ve been asked “Where do you find this stuff?” by folks who read this column and/or listen to my radio shows and podcast. Mostly the question is asked by the sincerely curious, though sometimes the question is accompanied by a derisive smirk.

My normal response is a half-joking, “I don’t find it. It finds me.” But in the case of the fantastic array of crazy, rocking, sometimes bizarre, and occasionally beautiful sounds I get from an obscure little German outfit called Off Label Records, I honestly don’t remember how I found it. All I know is that in the past four or five years, links to music-packed zip files just show up in my email and sometimes physical CDs appear in my mailbox (yes, shipped all the way from Europe).

Off Label is a prolific little outfit, having released albums, EPs, and 7-inch singles by dozens of acts in the past few years, mostly from Europe, but also South America and Australia.

Just recently I was happily surprised to find a new CD mailed by Off Label’s supreme commander, Johnny Hanke, in my box, a tasty little compilation called Off Label Werkschau 2009-2014 featuring most of my favorite Off Label artists. And better yet, nearly all of these are new songs (plus a few that saw very limited releases).

So what kind of music is this? “Good music” is the short answer. But more specifically, Off Label specializes in the stuff I love the best.

There is a healthy portion of wild, snotty garage-punk, represented here by, among others, The Vagoos, Jonah Gold & His Silver Apples, Lynx Lynx, Thee Verduns, and The Mokkers, an all-female German group that does a spirited cover of Thee Headcoatees’ “Wild Man.”

Also, there’s a whole lot of warped country and folk. Louisiana expatriate DM Bob and his accomplice Speedy Jake do an inspired slop-bucket cover of Charlie Rich’s “Big Man,” while The Dad Horse Experience XL kick off the album with a banjo-led gospel romp, “Too Close to Heaven.” The Salty Pajamas’ “Rats in My Amp” is one of the more surreal selections here. The Dinosaur Truckers play a song called “All the Way Back Home” in their sweet ’n’ purdy German bluegrass style. And Pea & The Pees’ wacky hillbilly workout “Horse & Cows” would make Holly Golightly & The Brokeoffs jealous.

Off Label is one of the world’s leading purveyors of loud, stripped-down, Bob Log-informed blues, and some of its major masters of this weird subgenre are present and accounted for on the compilation. My favorite is the Brazilian one-man sonic assault team O Lendário Chucrobillyman, who plays a song about a “Chicken Yodeling Woman.”

Speaking of poultry, the Australian one-man band who calls himself Made for Chickens by Robots does a slow, clunky, and irresistible number called “Meatjuice Moustache,” while The Blues Against Youth, yes, another one-man guy, this one from Rome, shows off some hot licks on his song “Dotted White Line.”

But there also selections on Werkschau that don’t fit neatly into any of these categories. For instance, Jenny & The Steady Go’s play straight-ahead rockabilly, while Reverse Cowgirls, a Dutch group, performing a tune called “Worm,” falls somewhere between country-rock and garage. The Coconut Kings, a Swiss band, sound a lot like the Squirrel Nut Zippers on “No Calypso Song.”

And VulgarGrad, a band from Australia that specializes in Russian-style songs, sounds like an acoustic Gogol Bordello on the song “Ballroom,” though the singer sounds more like Popeye than Eugene Hütz.

Chances are you’ve never heard of most — maybe not even any — of the musical acts on Werkschau. Don’t feel bad. I hadn’t either, before Hanke started sending me all this stuff a few years ago. Don’t let that stop you. You can find this compilation and all the other crazy Off Label music at their website, www.offlabelrecords.de, as well as the usual download sites.

Here are some other recent releases from the company. And as fate would have it, all three of these acts have Bandcamp sites, so you can listen to their music and if you like it, do yourself and civilization a favor and buy it!


* The Vagoos Love You. This is the second release by this German garage group, following their 2014 self-titled album. Love You is only six songs — and that’s my only complaint about it. If you like The Yardbirds and early Stones and songs like “(I’m Not Your) Stepping Stone,” you’ll hear those influences immediately. And they even include a hopped-up surf instrumental called “Vendetta.” The Vagoos’ Bandcamp page is www.thevagoos.bandcamp.com. You’ll also find their first album there.

* Good Times by Oh Lazarus. Here’s an Italian group that loves good old early 20th-century blues, country jug-band and hot jazz. This album has Euro-filtered covers of songs like “I Wish I Could Shimmy Like My Sister Kate,” “St. James Infirmary,” “Single Girl Again,” Skip James’ “Crow Jane,” and Tom Waits’ “Come On Up to the House.” Its Bandcamp page is www.ohlazarus.bandcamp.com.

* Uneasy Grounds by Dead Cat Stimpy. You like those raunchy lo-fi one-man blues bashers like O Lendário Chucrobillyman and the others I mentioned above? Then Dead Cat Stimpy is for you. He’s a Dutch fellow who’s undaunted by inviting comparisons to one of America’s greatest in his song “Possessed by Robert Johnson.” But my favorite here is the aggressively rocking “Twist Man.” Stimpy’s Bandcamp page is www.deadcatstimpy.bandcamp.com. You can even find a free download of a live album there.

Enjoy some videos from some of these Off Label bands.

And here is Made for Chickens by Robots