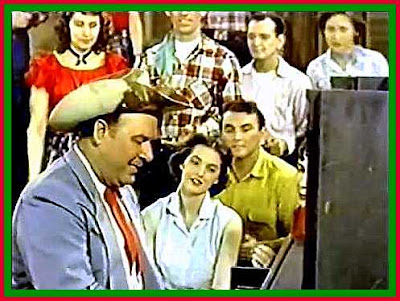 He only wanted to make the kind of music "that'll make them goddamn beer bottles bounce on the table."

And I believe that Aubrey Wilson "Moon" Mullican accomplished that goal many times over.

Born in Polk County, Texas in 1909, Tuesday would have been Mullican's 107th birthday.

As a boy in Texas, the first music he loved was the blues. According to an article on the Texas State Historical Association site:

Though Moon served as a church organist during his teens, he developed an interest in blues music and learned to play the guitar with instruction from a black farmer. Impressed also by pianists who performed in local juke joints, Mullican developed a distinctive two-finger right-handed piano style that became his trademark. Much to the chagrin of his father, he began to play for dances as a teenager and aspired to become a professional musician. When he was about sixteen years old he moved to Houston and worked as a piano player for establishments that some observers characterized as "houses of ill repute." Sleeping by day and working evenings, Mullican may have received his nickname for his nocturnal habits during this period. For a time in the 1930s he performed with his own band in clubs and on the radio in Southeast Texas and Louisiana.

By the 1930s he was playing in a number of western swing bands including  Cliff Bruner's Texas Wanderers,

In 1947 he signed with King Records in Cincinatti, where he recorded his best-known song "I'll Sail My Ship Alone." In 1949 he joined The Grand Old Opry.

Along the way, Mullican he developed a style of hillbilly boogie that was a huge influence on rockabilly. In fact one of Mulican's devotees was a fellow singing piano player named Jerry Lee Lewis. Mullican's style spanned country, blues, jazz and later, he embraced rock 'n' roll.

By the time he died on Jan. 1, 1967, he'd faded away from the national stage. But he kept on gigging in Texas, making them goddamn beer bottles bounce on the table until the end.

So happy belated birthday, Moon. Here are a few videos of live performances to keep his memory alive.

I wonder if Moon ever met Clarence "Frogman" Henry ...


Moon sings of the moon