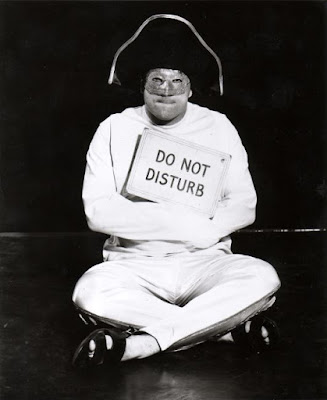 Yesterday, May 3, was Napoleon's birthday.

Napoleon XIV, that is.

Samuels amazed and delighted a whole generation of misfit kids like me back in 1966 when -- under his nom de goon -- he released his greatest (and of course only) hit "They're Coming to Take Me Away Ha-Haa!"

It was a tuneless dirge, a proto-hip-hop number if there eve was one, featuring an instrumental track consisting only of pounding drums and sirens (more than 20 years before Public Enemy!)

We were too young and guileless back then to realize that the 'funny farm" wasn't actually funny in rel life, so we just embraced the craziness.

Though Napoleon seems to be retired, Samuels is still kicking. He runs a talent agency in the Philadelphia area, where you can book magicians, clowns, hula dancers, one-man bands, ventriloquists, bagpipers and more.

Most people who know Napoleon XIV for "They're Coming to Take Me Away." But he made an entire album of loony bin classics. Here are some of them.

I have this strange vision of Napoleon XIV abducting an entire high school marching band and forcing them to perform "Marching Off to Bedlam."

One of his finest, "The Nuts in My Family Tree"

"I Live in a Split Level Head" is even crazier than "Take Me Away."

And just for those who missed out on the song that touched a touched generation ...

I did a Wacky Wednesday earlier this year featuring songs about insanity (including  "Aaaaah-aah Yawa em Ekat ot Gnimoc Re'yeht," a backwards version of the above song.) You can find that HERE

I got a nice email today from Tom Wilk, a reader and music writer in New Jersey. He actually interviewed Jerry Samuels, I paste Tom's email here with his permission:

Hi Steve,
Saw your post on Napoleon XIV and it prompted some memories. I was 10 when I purchased "They're Coming to Take Me Away" as a single in 1966. I always remember it sounded great on an AM radio and that the flip side was the song played backwards.

Around 1982, I got to interview Jerry at his home in Northeast Philadelphia. At the time, I was a reporter at The Gloucester County Times in Woodbury, N.J. It's now the South Jersey Times. I had interviewed Dr. Demento the year in Santa Monica and he told me that Napoleon XIV was actually Jerry Samuels.

One of Jerry's side businesses at the time was he made roach clips in the shape of a G clef. I remember him telling me that the cops confiscated one of his roach clips but couldn't figure out how it worked so he wasn't charged. He also told me of a formula of how to weigh an ounce of a pot. It was the same as a combination of coins (quarters and dimes, I think. I have forgotten the exact number). Jerry also gave me a copy of a privately produced single he recorded called "I Owe a Lot to Iowa Pot" b/w "Who Are You to Tell Me Not to Smoke Marijuana."

I wrote a feature story about him but the paper decided not to run it because of the marijuana references. I may have still have a copy of the story in my basement. I know I still have the "I Owe a Lot to Iowa Pot." That song is also on YouTube.

Indeed it is, Tom. And now it's on this blog too. Thanks for your email.