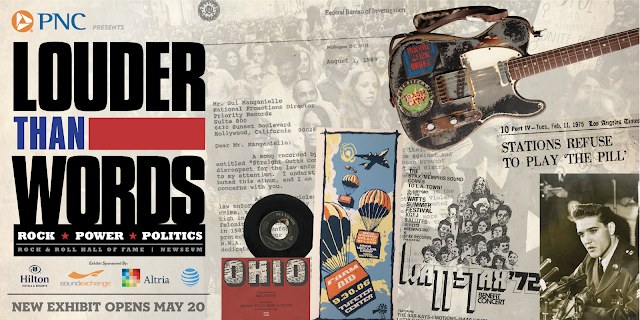 (I couldn't decide whether this post belongs in this blog or my politics blog, so I'm doing both)

It was from the Rock & Roll Hall of Fame, which is in Cleveland, the same city where the convention is being held next month.

The release basically was a pitch trying to get reporters who will be covering the convention (sadly, I won't be among them) to spend some time at -- and some ink on -- the Hall of Fame.

"As global attention descends upon Cleveland for the Republican National Convention, GOP leaders, journalists, convention-goers and tourists will all have one “must-see” destination on their list – The Rock & Roll Hall of Fame."

And what will they find there?

The news release said the Hall of Fame is "super-excited" about a new exhibit "Louder Than Words: Rock, Power and Politics," which "examines how music has both shaped and reflected our culture norms on eight political topics: Civil Rights, LGBT Issues, Feminism, War & Peace, Censorship, Political Campaigns, Political Causes and International Politics."

Included in that exhibit, the release said are artifacts such as:

* Artifacts related to the Vietnam War, the May 4, 1970 shooting at Kent State, the fall of the Berlin Wall and the #BlackLivesMatter movement.

I just have one question for the Rock & Roll Hall of Fame:

You guys do realize this is a Republican convention, right?
at June 17, 2016