A version of this was published in The Santa Fe New Mexican
June 24, 2016 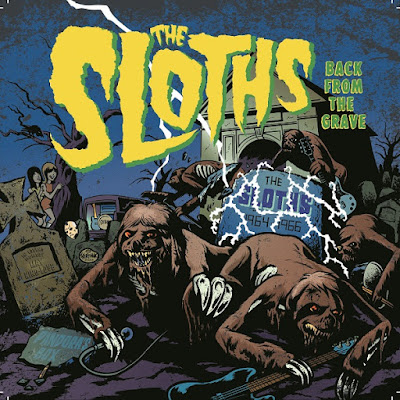 I don’t know. Am I getting too old for this stuff? I mean, what does it say when I discover a new — well, relatively new — album from an obscure garage band I like via the AARP?

That’s right, the latest magazine of the AARP (formerly known as the American Association of Retired Persons) has a feature on The Sloths, a Los Angeles band that started out in the mid-1960s.

No, I don’t subscribe. But maybe I ought to. After all, the AARP magazine last year published the first actual Bob Dylan interview in years and sent copies of his album Shadows in the Night to 50,000 random AARP the Magazine subscribers.

But while it’s easy to see that Dylan’s collection of Frank Sinatra standards (and by the way, he recently released a similar album called Fallen Angels) would appeal to the oldsters — which I define as people maybe three or four years older than me — The Sloths, as shown by their wild new record Back from the Grave, are still loud, raw, and sometimes even snotty. They’re a rocking band, not a rocking-chair band. The Sloths are definitely not for the "early-bird special" crowd.

Some ancient history of The Sloths: The group started in 1965 out as a band of high schoolers. They started getting gigs during that riotous era at Sunset Strip clubs like Pandora’s Box, The Whiskey a Go-Go, The Sea Witch, the Hollywood Palladium, sharing stages with groups like The Animals, The Doors, and The Seeds.

The Sloths recorded only once. It was a 45 whose A-side featured a primitive, angst-ridden, hormonal, Bo Diddley-fired tune called "Makin' Love."

Never heard of it? Don’t feel bad. It never was a hit. According to the present-day Sloths, radio stations wouldn’t play it because the idea of high-school kids expressing their burning desire to “make love” was too risqué to risk. I’m not sure why the flip side, a more innocent-sounding “You Mean Everything to Me” never went anywhere. I don’t think I’ve ever even heard it.

Soon after “Makin’ Love” flopped, The Sloths broke up. Some members formed a new band called The May Wines that included a singer named Tom McLoughlin. They didn’t last long either. But though “Makin’ Love” didn’t sell much when it first came out, it became something of a holy grail for fanatical garage-rock record collectors. The song was included on one of the influential Back from the Grave compilations of the 1990s. (And yes, that was where they got the title for their new album.)

Getting included on the compilation stirred up new attention to the band. At one point the original single of “Makin’ Love” in its original picture sleeve reportedly was selling on eBay for $6,550.

Apparently that was one of Rummans’ inspirations for re-forming The Sloths. Rummans, the only original Sloth in its 21st-century version, recruited McLoughlin — who, since his May Wines days, has worked as a film director and writer (and early on, he actually studied the art of mime) — and other past musical pals.

I got to see the new Sloths three years ago. They played at the Ponderosa Stomp in New Orleans on a bill with several other garage-rock greats including The Sonics and The Standells. Though not as crazily intense as The Sonics (who are in the same basic age range), The Sloths played a credible and fun-filled set at Ponderosa. McLoughlin’s stage presence was remarkable.

At one point he was wearing a priest’s collar, then later a Mexican flag as a cape. During the instrumental break of the song “Never Enough Girls,” (which kicks off the new album) he tried to blow up a cheap plastic sex doll, but ran out of time (or breath) before he had to start singing the next verse.

But the most interesting songs here are the ones in which The Sloths’ maturity is a major strength. There’s “One Way Out,” in which every verse is a brutal little story about a drug-addled teenaged girl, a divorcing couple, a soldier who snaps and commits an atrocity, and a suicidal kid who ends up preaching on the streets for some cult. McLoughlin tells the stories in a voice that’s sympathetic but not about to pull any punches.

And even better is “Before I Die,” in which McLoughlin turns on its head that famous youthful declaration by The Who. “I wanna be old before I die,” he sings to a chugging Yardbirds-like beat. Here the singer isn’t selfishly yearning to cram more sex, drugs, and money into his life, or to achieve some immortality. Instead he’s wanting more time to apologize to people he’s hurt, pay off his debts, and “say things I should have said long ago.”

Here’s hoping for a long second life for The Sloths. 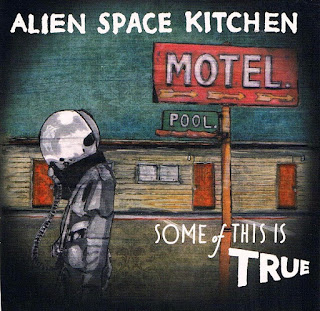 * Some of This is True by Alien Space Kitchen. Here is a tough-rocking but ultimately catchy-sounding Albuquerque trio who describe their sound as “garage-punk space-pop.” (They previously described their sound as "hot interstellar space punk for consenting adults.")

This, their second album (scheduled for release in July) is a strong follow-up to their 2012 debut, Just ASK.

In fact, the music on the new one is probably a little stronger. On Just ASK, the band basically was a duo, featuring singer-guitarist Dru Vaughter, and drummer (and singer) Noelle Graney. The new album is the first with bassist Mess Messal.

Like their first one, Some of This is True is full of songs full of inspired nonsense about spaceships and even space people.

The opening cut is called “Alien Agenda,” which starts off with a slow guitar riff that sounds like some serious Brit-folk-rock is about to be committed. Instead, the song explodes with one of the stronger rockers on the album. There are also the conspiracy-soaked “How to Fake a Lunar Landing” and “Welcome to Star 65,” which goes back and forth between funky/jazzy verses sung by Graney and a crazy punked-out response sung by Vaughter.

At the moment, my favorite songs here are the delightfully paranoid “The Decline and Fall of Western Civilization” and the raging song that follows it, “Better Daze.”

All in all, this would be a cool soundtrack for an alien abduction.

Alien Space Kitchen plays Friday, June 24, at Burt's Tiki Lounge in Albuquerque, with a lineup that includes Weedrat and The Dying Beds; music starts at 9 p.m.

This is the official video for "One Way Out."

And this is the original "Makin' Love."

And here are a couple from Alien Space Kitchen.

"Losing My Mind is on the new album.

This one originally was by an African psychedelic group, Witdh

And for all you AARP rockers, here's a message from Stan Ridgway ...