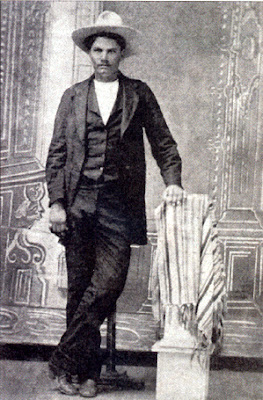 Tomorrow marks the 121st anniversary of the killing of John Wesley Hardin, a true bad-ass Old West gunslinger. He was a cowboy, a fighter against reconstruction and an actual jailhouse lawyer who studied law while serving time for killing a sheriff's deputy in Brown County, Texas. He claimed to have backed down Wild Bill Hickok, who was sheriff of Abilene.

He was shot and killed in the Acme Saloon (no, this wasn't a Roadrunner cartoon) in El Paso on Aug. 19. 1895. Killed by a guy he'd previously hired to kill the husband of his girlfriend.

Hardin, the son of a Methodist preacher, claimed to have killed more than 40 people (though only 27 were confirmed.) One of his victims was a friend he killed for snoring.

But according to Frontier Times:

Hardin was an unusual type of killer, a handsome, gentlemanly man who considered himself a pillar of society, always maintaining that he never killed anyone who did not need killing and that he always shot to save his own life. Many people who knew him or his family regarded him as a man more sinned against than sinning.

Or as Bob Dylan might say, "he was never known to hurt an honest man."

Actually Dylan did say that in a song titled "John Wesley Harding." Dylan added a "g" to the outlaw's name and basically turned him into Robin Hood, a "friend to the poor" who "was always known to lend a helping hand." Though the hero of Dylan's 1967 song bore little resemblance to the real Hardin, it's still a fine little tune.

You can play it here:

But about eight years before Dylan's song, a hillbilly named Jimmie Skinner did a slightly more historically accurate account of Hardin's life. For example, the song correctly says Hardin "shot a man dead at the age of 15" and it does have him going to prison for killing a law enforcement officer (though in real life, Hardin was pardoned after serving 16 years of his 25 year sentence for kiling Deputy Charles Webb.)

If that melody sounds familiar, that's because Webb lifted it from another outlaw song, "John Hardy Was a Desperate Little Man,"  recorded in 1928 by The Carter Family (and a million others after them and a few before them). John Hardy was completed unrelated to John Wesley Hardin. Hardy was a black man who was hanged for murder in 1894 in West Virginia. He'd killed another guy in a craps game. (Holy Stag-o-lee, Batman!)

Finally, I'm not sure what this last song is about. Maybe the singer who called himself John Wesley Harding. On;y Wesley Willis knows for sure and he's not talking anymore.