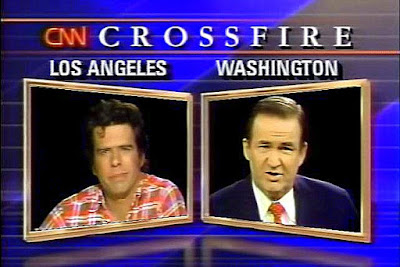 Mojo doesn't perform music that much these days. For the past several years he's done a weekday radio show called The Loon in the Afternoon for Sirus XM's Outlaw Country station.

But his songs are immortal.

Though he's best known for such classics as "Don Henley Must Die," "Debbie Gibson is Pregnant with My Two-Headed Love Child," and of course "Elvis is Everywhere" -- the song that made me a lifelong fan -- today I honor Mojo with a bunch of less familiar songs.

Let's start with this clip from 1989 -- which was around the first time I ever heard Mojo live -- Here he sounds like a one-man redneck Velvet Underground.

Truly he was the King of Sleaze.

Here is a live performance from earlier this year in which Mojo discusses current events and politics. I can hear the influence of Wesley Willis in this one.


And speaking of politics, back in 1990, Mojo was a guest on CNN's Crossfire where he did battle with Pat Buchanan (who used to work for another Nixon) and some Junior League Tipper Gore over the evils of rock 'n' roll and the need for mandatory labeling of dirty, perverted, violent, Satanic records.


(If you're a masochist, the rest of Mojo's Crossfire appearance can be found HERE and HERE.