A version of this was published in The Santa Fe New Mexican
Sept. 23, 2016

Like the best albums by The Handsome Family, their latest one, Unseen, is a literary as well as a musical adventure. With lyrics by Rennie Sparks and melodies and most of the vocals by her husband, Brett Sparks, this record is not just a collection of sweet country tunes. It’s full of amazing stories, unforgettable images, and echoes of ancient myths in contemporary contexts.

Recorded at the couple’s home studio in Albuquerque, Unseen starts out with a modern outlaw ballad called “Gold.” Brett sings:

Got a tattoo of a snake and a ski mask on my face/But I woke up in a ditch behind the Stop ‘n’ Go/Lying in the weeds with a bullet in my gut, watching dollar bills fly away in the dust.”

The Handsomes don’t give us the full story on how this stick-up went awry. All we know is that this criminal mastermind is dying in some vacant lot and thinking about that girl with dark eyes who somehow led to his demise.

“The Silver Light” is a snapshot of a casino, a “forest of slot machines” with flashing lights, cigarettes, all-you-can-eat buffets, and old men with oxygen tanks dropping quarters in slot machines. That sounds pretty depressing, but the sweet dobro picking of longtime Handsome crony Dave Gutierrez makes it easy to imagine it as a happy saloon singalong.

The New Mexico State Fair should turn “Tiny Tina” into an ad next year. Brett and Rennie sing with childlike innocence about going to the fair; riding the Tilt-A-Whirl; eating chili dogs, funnel cakes, and fried beer; and “shooting water guns at grinning clowns.” But they have one huge regret: For some reason they didn’t go see Tiny Tina, “the world’s smallest horse,” and it only cost a dollar. “Why didn’t I go see that little horse?”

“The Sea Rose” is a sailor legend, similar to that of mermaids or sirens. A mariner hears the call of this sexy mirage beckoning him to join her and marry her in the seaweed. Even more mysterious is “The Red Door,” which sounds like some long-lost song by The Band with the late Richard Manuel channeling New Orleans R&B. It’s about a beautiful woman with implied supernatural origins.

One of the most memorable songs on Unseen is “Back in My Day,” the Sparks’ take on nostalgia. “We had maps that unfolded back in my day/You could drink from the river/We had gods made of clay.”

At first it seems as if they’re making fun of old coots bellyaching about the good old days. But Rennie Sparks would never write something that obvious. Instead, it seems she’s expressing a yearning for the good old days from an invisible world none of the rest of us have ever seen.

The next time I hear some vinyl fetishist yammering about the superiority of LPs and 45s, I’ll be tempted to sing these lines from this song: “And music sounded better. We recorded on rings of ice/And as the songs turned to water we couldn’t help but cry.”

Let the Handsome Family’s songs turn to water in your brain so that strange but beautiful plants can grow inside there. 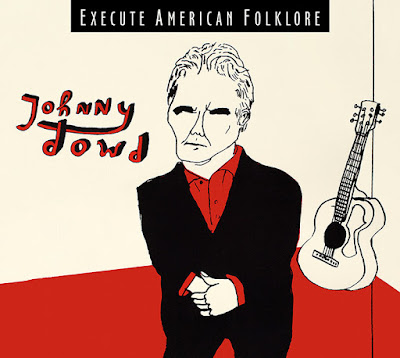 * Execute American Folklore by Johnny Dowd. You might not hear any obvious similarities between The Handsome Family and Dowd, but both appeared in a wonderful 2003 documentary by musician Jim White called Searching for the Wrong-Eyed Jesus.

Dowd, in fact, was touted as “alternative country” when his first album was released in the late ’90s. The first time I saw him live was at a party for No Depression magazine at the famed Austin honky-tonk the Broken Spoke.

But the only thing that sounds remotely country about Dowd on his last several albums is his Pauls Valley, Oklahoma, drawl.

This new album is much closer to hip-hop or electronica — though commercial radio stations devoted to those formats are no more likely to play this album than is your basic hot new country station. And some songs are infused with Latin touches (what might be described as a Martian mambo) or even metal. Truth be told, Johnny Dowd doesn’t really sound much like anyone but Johnny Dowd.

And I happen to love that sound. Here Dowd himself plays all the instruments — except the instrument named Anna Coogan, who sings background vocals on several songs and lead vocals on one. Dowd mostly speaks rather than sings his lyrics.

There are some doozies on Execute American Folklore. He dedicates the ultra funky “Last Laugh” to his mother, “a union maid if ever there was one.” In the song, however, his mom is a call girl. But the story, laced with Biblical imagery, actually deals with some bitter loser — lots of Dowd protagonists fall into this category — plotting unspecified revenge against those who have wronged him.

“Sexual Revolution” is not about the joy of sex. Dowd recites a tale of a frustrated man whose cheating wife leaves him in a sad world where “pornographic fantasies infect my brain, filling me up with guilt and shame.”

Then in the deceptively upbeat “Whiskey Ate My Brain,” the singer catalogs his physical and mental deterioration. “Cancer ate my liver, God’s an Indian giver … Cocaine ate my nose, I can’t smell the roses.”

Coogan steps out front in “Brains-a-flame,” which sounds like Dowd has been listening to the old Brazilian psychedelic Tropicália band Os Mutantes. She sings about her dream man who “chain-smokes my heart three packs a day/He’s like a bad habit who won’t go away.”

In the closing track, “A World Without Me,” built on the classic “Louie Louie”/”Hang on Sloopy” hook, Dowd muses about the fact that memories of his life will quickly fade.

But the song only makes me fantasize about archaeologists in a future century stumbling across a cache of Dowd albums, prompting them to write surreal theories about life in the early 21st century.

Some videos for yas

Here's "Gold" from The Handsome Family. This one has some nice footage of East Central in Albuquerque.

Another favorite from Unseen


Here's some live Johnny Dowd with his latest band The Sex Robots. (You might want to skip the first 20 seconds or so. Weird buzz before the song starts.) Despite what the YoutTube title says, this is "Whisky Ate My Brain."

Anna Coogan steps out front with "Brains A Flame."

And just for the heck of it, here's the trailer for Searching for the Wrong-Eyed Jesus.