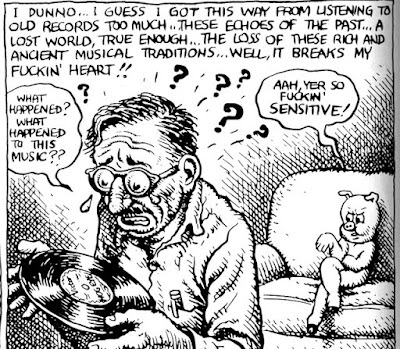 Cartoonist and old-time music enthusiast Robert Crumb turned 73 this week. Last year around this time in honor of his birthday I posted a bunch of songs by Crumb, most of them with his Cheap Suit Serenaders. (Check that out HERE.)

This year I'm posting original -- or at least older -- versions of songs recorded by Crumb & The Cheap Suit Serenaders.

Crumb and the band based "Get a Load of This" -- one of their best-known tunes from the early '70s -- on Charley Jordan's "Keep it Clean." Crumb and the lads added some modern references -- "Bowling for Dollars," "pink burritos" etc. -- and, for reasons unclear to me, they changed Coca Cola to R.C. Cola. But you still hear a lot of the original in Crumb's version.

Here is one the better known songs that Crumb and band covered. "Singing in the Bathtub" was written by Herb Magidson and Ned Washington, It first was performed by Winnie Lightner in the 1929 movie Show of Shows. British Music Hall vet Gracie Fields recorded it around the same time, (I think I know now where Singing Sadie got her shtick.)

Here's one Crumb got from this amazing old string band from Texas led by mandolinist Coley Jones.

Crumb picked up this entendre-laden masterpiece from Harry Roy and His Orchestra.