THROWBACK THURSDAY: Who Exactly Is Coming 'Round that Mountain? 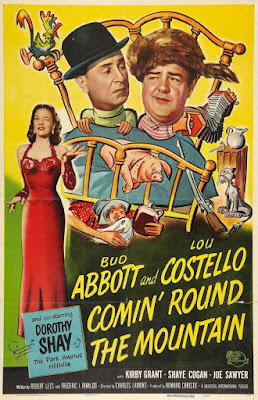 Here's one of those corny old songs from my childhood that everyone should know.

"She'll Be Comin' Round the Mountain" was taught in kindergarten. It was sung in cartoons and was the title of an Abbott & Costello movie. Mitch Miller & The Gang invited you to sing along with it. Barney the Dinosaur did his own take on it.

But it took a record by Neil Young a just a few years ago to make me realize that there was something much deeper -- much spookier going on here.

The song we know comes from a slave spiritual called "When the Chariot Comes."  In Neil's version on his 2012 Americana album it's titled "Christ's Chariot."

Some of the verses start out:

I like the way that this article in Cracked describes it:

"When the Chariot Comes" and, by extension, "She'll Be Coming 'Round the Mountain," are both songs about the Rapture -- the day when Jesus comes back to earth to play favorites. "She" actually refers to the chariot he'll be riding down to bring about the End of Days. ... Christ's big ol' Rapturous Red Flyer. So there you have it: That merry old-timey prospector song your kids are singing out in the yard is actually rejoicing about the imminent death of all humanity.

I couldn't find any old, old versions of "When the Chariot Comes." But here folksinger Roy D. Durrence does this recreation.

Carl Sandburg was the first to publish the song his 1927 book, The American Songbag.
Here's Ramblin' Tommy Scott, an old medicine show singer, playing a nice and lively version of it.

This Famous Studios Screen Songs cartoon below might be the first place I ever heard "Comin' Ruond the Mountain."

The saucy school marm in this version will be "lookin' for a feller" when she comes. "She don't want no city slicker, just a man who holds his liquor."

The actual song -- with the bouncing ball --starts at about the 4:19 mark.

Around that time Funkadelic took it to the funky cosmos, calling out to the Mother Ship.