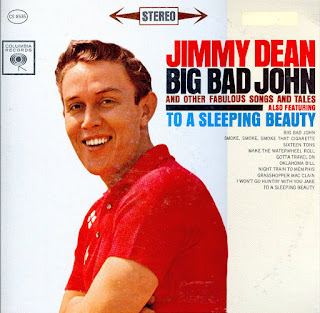 Back before he became known mostly for his sausage, Jimmy Dean was a country / pop singer famous mostly for creating a modern legend in the form of a mysterious coal miner named Big John.

Released in September, 1961 at the height  of country music's "faux-folksong" craze (think Marty Robbins' "El Paso," Johnny Horton's "The Battle of New Orleans," Lefty Frizzell's "Long Black Veil," Bobby Bare's "Miller's Cave," etc.) Dean became the ultimate white rapper with his hip, finger poppin' delivery on "Big Bad John."  The subject of the song was a bigge-than-life Paul Bunyan / John Henry style hero who captured the nation's imagination by selflessly sacrifcing his own life to save his fellow workers in a mining disaster.

Then came the day at the bottom of the mine
When a timber cracked and men started cryin'
Miners were prayin' and hearts beat fast
And everybody thought that they'd breathed their last, 'cept John
Through the dust and the smoke of this man-made hell
Walked a giant of a man that the miners knew well
Grabbed a saggin' timber, gave out with a groan
And like a giant oak tree he just stood there alone, big John ...

Here is Jimmy performing the song on his own TV show a couple of years after it became his biggest hit.

But Jimmy couldn't just leave Big John at the bottom of that pit. A few months later, in January, 1962, he released a sequel about Big John's long lost lover, the Cajun Queen.

But this song just didn't have the same magic. In fact, in 2013, the Cracked website used "The Cajun Queen" to lead off its list of "4 Songs You Didn't Know Had Sequels (That Ruin The Original)."

All that gritty realism from the original is tossed out the window. In its place we get a bullshit tall tale that, if you told it to your grandchildren, they would immediately ask your doctors to up your meds. And they'd be right; clearly you need it.

Basically Queenie has so much magical sex appeal she has the power to raise the dead with her kiss.

Cracked concludes that "Jimmy Dean should have left poor John to rot alone in the mines, instead of artificially resurrecting him for the sake of a happy-dappy-sappy ending."

Maybe Jimmy agreed. In June 1962 he released a second sequel about the bastard spawn of Big John and the Cajun Queen, "Little Bitty Big John." And it was as if the magical resurrection that took place in "The Cajun Queen" never happened.

But Big John also made a gratuitous cameo appearance in another Jimmy Dean hit, "PT-109" which mythologized the World Wart II exploits of John F. Kennedy, who was president at the time. Check the very end of this song (which actually was released a couple of months before "Little Bitty Big John.")

But that's not the last we heard of Big Bad John or his woman.  Dottie West released this "answer song" in 1964. It's a re-imaging of the Cajun Queen story.

Fortunately the next place the legend of Big Bad John played out in the tacky world of homophobic parody. A guy named Steve Greenberg turned the legendary coal miner into a swishy hairdresser named "Big Bruce"

Similarly, Ben Colder -- the comic persona of Sheb Wooley who was best known for the novelty tune "The Purple People Eater" -- turned the heroic coal miner into "Big Sweet John." Colder's hero not only was gay, but a hippie also well. A real knee-slapper.

A more worthy successor is Hank Penny's 1970 "Big Bad John" inspired song of racial understanding called "The Strong Black Man," who not only saves his fellow minors from a cave-in, but makes the narrator see the errors of his racist thinking.