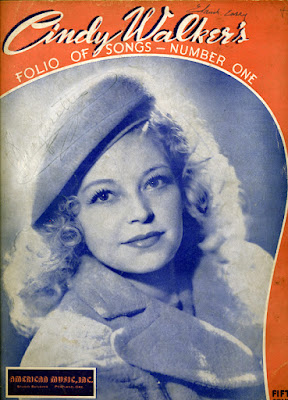 This little lady from Mart, Texas wrote so many classics it's uncanny.

And still today I'm frequently surprised when I realize that a song I love was one of Cindy's.

And actually it's unfair to pigeon hole her as only a country songwriter. Her songs have been covered by pop, rock and jazz stars as well.

In fact she got a recording contract after pitching a song -- "Lone Star Trail" to none other than Bing Crosby.

As a gutsy 22-year-old on a trip to Los Angeles with her parents, she walked into Crosby's office determined to get the song to Der Bingle. And she did.

Below are several Cindy Walker songs, some well-known, some not so much. Each one is a jewel.

Woody Guthrie's not the only one who wrote Dustbowl ballads. This is an early song by Cindy, ritten in the 1930s when she was a teenager. Bob Wills & The Texas Playboys recorded it in 1941.

Some of Wills' most famous songs were written by Cindy, including this one:

She wrote this singing cowboy tune for Gene Autry. I first heard the version by The Byrds on Sweetheart of the Rodeo.

This Vietnam era recording by Jim Reeves is as moving now as it was in 1966. This is one that was loved by doves as well as hawks. Cindy's lyrics cut to the heart.

I recently posted a video of Webb Pierce doing this song, which was a hit for him the '60s. Here's a more recent version by Ricky Skaggs.

She even wrote a song for Spike Jones, "Barstool Cowboy from Barstow."

Finally, this last song probably is my favorite Cindy Walker songs -- and one of my favorite songs in general. I'm still partial to Ray Charles' version from Modern Sounds in Country and Western Music. But Cindy's own version is wonderful as well.