THROWBACK THURSDAY: The Lady in the Long Black Veil 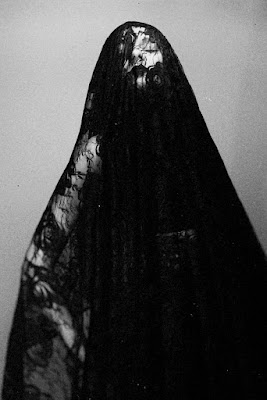 It's  a song sung by a ghost, so it should not be a surprise that it's a song with an afterlife.

I'm talking, of course about "Long Black Veil." I first heard it by The Band. It's probably best known for its version by Johnny Cash. It originally was recorded by Lefty Frizzell. It was written by  by Danny Dill and Marijohn Wilkins.

American Songwriter in a 2013 article said the song began with Dill wanting to "write a folk song that would last for the ages."  Writer Jim Beviglia said:

He was partially inspired by a newspaper story of a priest in New Jersey who was killed under a streetlight with witnesses watching. For the chorus, Dill drew from the song “God Walks These Hills With Me.”

Perhaps most fascinating of all, Dill borrowed elements of the urban legend surrounding the grave of actor Rudolph Valentino. It seems that each year following the death of the legendary Italian screen star, a woman wearing a long black veil would lay a single red rose on the grave, drawing the attention of the press in the process. (The majority of the evidence points to the Valentino phenomenon having originated as a publicity stunt, which was then carried on in subsequent years by copycats.)

Dill took his unfinished song to co-writer Marijohn Wilkin to hammer out the plot. What they came up with was a tale that transcended all of its disparate sources.

Indeed they did. Here's Lefty's version recorded in 1959:

The song has been covered by a wide range of folk, country and rock acts, from Joan Baez to Social Distrortion's Mike Ness to The Chieftains (vocals by Mick Jagger) to Nick Cave to Bill Monroe to Orion.

But before most of those, the song's co-writer, Marijohn Wilkin, cut a version from the perspective of the best friend's wife. She called it "My Long Black Veil."

Then in 2011 Jason Boland & The Stragglers recorded a song called "False Accuser's Lament" in which he revealed the murder beneath the town hall light was part of a conspiracy by the husband of the lady in the long black veil.

Somehow Boland's answer song didn't inspire its own answer song in which the ghost of the frame man seeks revenge on his former best friend.

Maybe that's next. But until then, here is Red Foley's country hymn, "God Walks These Hills With Me"

[UPDATE 6-29-17: Just a couple of months after this post, Foley's version has disappeared from YouTube. But here's a version by Don Gibson.]

And here are enough "Long Black Veils" to last you an eternity!