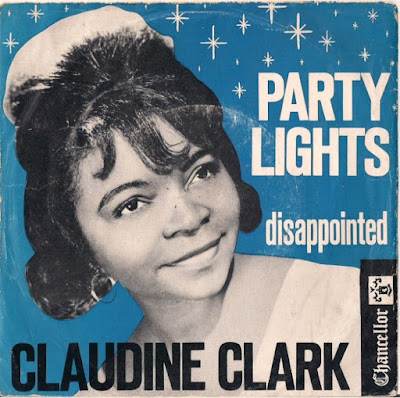 Claudine Clark can definitely be considered a one-hit wonder.

The song, written by the Georgia-born, Philadelphia-raised Clark herself  was about a poor kid whose oppressive, over-restrictive  mother wouldn't allow her to go across the street to a big shindig where they were doing  the twist, the fish, the mashed potatoes ...

I see the lights, I see the party lights
They're red and blue and green
Everybody in the crowd is there
But you won't let me make a scene

Not great poetry, but there was something so raw, so desperate in Clark's voice, you couldn't help but feel for the poor teen and the grave injustice she suffered.

Listen to the party, mama!

But like the girl in her own song, Clark for most of her career was forced to witness the fun from afar.

She went on to record more songs, including the follow-up to "Party Lights," a fun little romp called "Walkin' Through a Cemetery." Listen close, especially toward the end. It sounds as if she had Yoko Ono sitting on background vocals. I believe this should have been an even bigger hit than "Party Lights." But it didn't work out that way.


Subsequent Claudine releases didn't fare much better, though to my ears, tunes like "The Telephone Game" were just as good as lots of the other proto-soul tunes that dominated the charts in the early '60s.


And "Dancin' Party" sounds like a social even her mother finally allowed her to attend.

Clark even tried changing her name, recording as "Joy Dawn" on songs like "Hang it Up."

Alas, that didn't do the trick either.