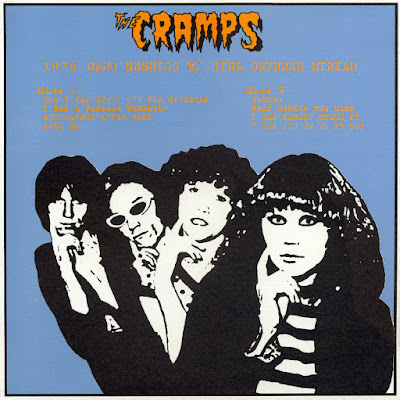 It was 40 years ago today Poison Ivy taught The Cramps to play.

And here's what she had to say:

So, like it or whatnot, now is the 40th anniversary of the Cramps first studio recording session, no matter what any boob or youtube might say. This sesh was in April 1977 and it was at Bell Sound in NYC and it was booked and paid for by Richard Robinson who also shot a home movie in his living room a few days later. The cover shown here was for  a Munster boot out of Spain many moons ago. I have no clue where they got the tape. That's all. You can debate the date all you want, but as Kim Brown's Renegades would say, "I Was There".  Just the facts, that is ALL.

As you can see, both the Youtube she posted as well as the bootleg album cover she refers to says the session in question in 1976, the year of our Bison Tentacle.

But like Miriam wrote, she was there and she says '77. So I'll go with that. Miriam said it, I believe it. That settles it.

Anywho, here's that music. As I said, the fi ain't high, but you're listening to HISTORY being made so stop your sniveling!

And in case you were wondering about the obscure reference to Kim Brown and The Renegades ...