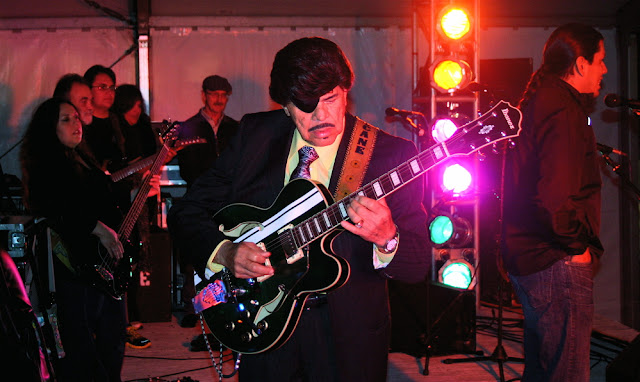 I was on the air doing my radio show last night when I learned of the death of Alberto Sanchez, better known as Al Hurricane. He died from prostate cancer, He was 81.

Anyone know of any gatherings, tributes, memorials for Al? Let me know. E mail me at sterrell(at)sfnewmexican.com  thanks

Al was the undisputed king of New Mexico music. I've been a fan for about 40 years but I didn't get to meet him until 1998 when I interviewed him for the New Mexican. At that point he still was going strong as a musician.

Here's a copy of that interview

A version of this was published in The Santa Fe New Mexican
June 7, 1998

The band is pumping a Norteno beat and the audience is warmed up. Literally. It's an outdoor show on a hot afternoon, but nobody seems to mind the sweat and the sun.

"Are you ready for the star of the show?'' the man behind the keyboards asks. The crowd roars in approval.

"Well, sorry. We're not bringing him out yet.'' But the bandleader's smile gives away his little joke. "No, I'm just kidding. Here he is, ladies and gentleman, the star of the show, the Godfather of New Mexico music, and my father, Mr. Al Hurricane!''

The Godfather emerges from his tour bus parked to the left of the stage as all eyes turn to him. He cuts a dashing figure white suit, white shoes, a mop of black curly hair and a face marked by a black eye patch a grim souvenir of a life as a traveling musician turned into a celebratory trademark of a man and his music.

"Orale!" Hurricane shouts, waving his hand in greeting and grinning. Some shout back. Others just clap and cheer louder. By now it's a standing ovation and he hasn't even started.

He basks in the moment. This more than the money, he says is what propels Alberto Nelson Sanchez, the man behind the Hurricane.

For about 40 years Sanchez/Hurricane has been making a living with his music. He owns his own record company, Hurricane Records, which still thrives in the age of the compact disc. In past years his family also owned its own recording studio and nightclub in Albuquerque.

And while the entertainment business is full of stories of careers destroying family relationships, the musician's road seems to have had an opposite effect on the Sanchez clan.

Hurricane has shared the stage with his younger brothers "Tiny Morrie" and "Baby Gaby," who was part of a recent show at Camel Rock Casino. He has seen his son, Al Jr., grow up to become his bandleader, and his nieces and nephews find musical careers of their own. He currently is working with his youngest daughters on what he hopes will turn into a recording project. 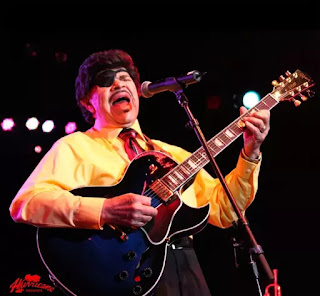 But the road has had its share of pain and loss for Hurricane as well.

He lost an eye in an automobile wreck on the way to a gig in Colorado in November 1969.

Both of his marriages ended in divorce, the second one with extremely tragic consequences.

In 1986, soon after his second divorce, his ex-wife's boyfriend killed his 2-year-old daughter. The boyfriend, Ruben Lopez, and Hurricane's ex-wife each were convicted of charges of child abuse resulting in death. Both served time in prison. Hurricane had a heart attack soon after the killing.

But his family, his music and his fans all helped him heal and go on.

The Godfather! ("Don't call me `El Padrino'," he later cautions a reporter. "There's a singer down in Texas who goes by El Padrino.") As the crowd outside of Camel Rock Casino cheers, it's easy to see that the man called Hurricane has won a big spot in their hearts. And you can tell he feels that love. Maybe that's why he doesn't immediately take the stage, but goes right for the center of the crowd.

Holding a wireless microphone, Hurricane sings his first several tunes right there among the people. Between songs he shakes hands with his fans, tells jokes with the men and flirts with the ladies. (Nothing raunchy, mind you. Not far away in the audience is Bennie Sanchez Hurricane's mother). During one song, he dances with a little girl who has come to the show with her parents.

Indeed, it's an all-ages show. As Hurricane finally joins his band on stage and more couples start dancing, you can see many generations. Men and women who look old enough to be the parents of the 61-year-old Hurricane dance next to couples in their teens not to mention small children who scamper about the concert area.

It's an inter-generational gathering on stage also. Hurricane's son, Al Jr., 38, leads the band and is a recording artist in his own right. At the recent Camel Rock gig, two daughters, Erika, 20 and 13-year-old Danielle the twin sister of the girl who was killed sang a few songs. Other sons and daughters have played with him in the past.

Hurricane has been playing music in public since he was younger than Danielle.

He was born in Dixon in 1936, but spent most of his early years in Ojo Sarco. His mother gave him the nickname "Hurricane'' as a child.

"I couldn't reach across the table without spilling a bunch of things and knocking everything over," he said in a recent interview at one of his favorite Mexican restaurants in Albuquerque. The Sanchez family moved to Albuquerque when Al was 9 years old. At first he found himself picked on because of his light complexion and natural blonde hair. (His jet black toupee is one of the worst-kept secrets in New Mexico entertainment circles).

But his music helped him win acceptance. Both his mother and his father, Margarito, who died in 1979, encouraged him in this direction, he said.

As a youngster he worked as a strolling troubadour at restaurants in Albuquerque's Old Town. As a student at Albuquerque High School he formed his own band.

During the late 1950s and early 1960s, Bennie Sanchez began a career of promoting rock shows at the old Civic Auditorium in Albuquerque. Among those who performed were James Brown, Chuck Berry and Elvis Presley. Hurricane said he played with Chubby Checker in Santa Fe at a show his mother produced.

The young Hurricane's group was frequently chosen to open the show for touring national acts and sometimes was hired as a ``pickup'' band for famous singers coming through town without their own backup groups.

This is how Hurricane hooked up with Fats Domino. For a short time he traveled with Domino, though he said he turned down a chance to tour Europe as a part of Domino's band in the early 1960s because he did not want to leave his wife and young children.

Hurricane said he also played some concerts as a guest guitarist with Marvin Gaye's band in the mid-1960s.

While he loved rock and soul music, by the late 1960s he realized "people here were hungry for Latino music."
The Godfather-to-be cut his first album Mi Saxophone in 1967 for a small independent record company. Soon after that, he and his family started Hurricane Records, which produced albums for Hurricane, Tiny Morrie and Baby Gaby, and later Al Jr.

More than 40 albums would be released on vinyl during the next couple of decades. Like other record companies in recent years, Hurricane now only deals in CDs and tapes. Hurricane said he has six of his own albums currently available on CD. And noticing that there was no venue in Albuquerque for Chicano music, the family bought the Far West nightclub on west Central Avenue.

Thus the Sanchezes became a mini-music industry of their own recording music at their own studio, distributing it on their own label and playing live at their own nightclub.

The family toured quite a bit in those days, mainly through the Western states with cities that had sizable Hispanic communities.

It was on the way to one of those out-of-state gigs that Hurricane lost his right eye.

"It was November First, 1969, in Walsenberg, Colorado,'' Hurricane recalled. "We were in our way up to a show in Denver. I was in a car, there were six of us, band members, you know. We were pulling a trailer with our equipment. Tiny, Gabe and my mom were behind us about two or three hours.''

The car hit an icy bridge and started to slide, Hurricane said. ``It turned over five times and I came out of the driver's side.''

There was a shard of glass stuck in his eye.

Hurricane's wife and children came to the hospital, he said. They got off the elevator as nurses wheeled him by in a gurney, "I heard my wife tell my son, `Look at that poor man. I hope your dad is not in that bad of shape.' My face was so swollen up my own wife didn't recognize me.''

The accident and the new eye patch didn't stop the music. But his first marriage soon came to an end. Hurricane remarried in 1971. 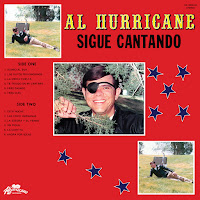 With his new wife, Hurricane had four more children Nelson, Erika and the twins Danielle and Lynnea.

By the early 1980s, Hurricane decided to sell the nightclub and the recording studio.

Tiny Morrie and his family moved to Mexico, where his son Lorenzo Antonio became something of a teen idol. Morrie's daughters would form a Spanish-language pop group called Sparx a few years down the road.

Baby Gaby by this point had decided to quit the music business. He became a postal worker but still performs occasionally.

The mid-1980s became the most horrible time in Hurricane's life the second divorce, the killing of Lynnea, the heart attack, which he says came about due to the stress of losing his little girl.

Lynnea Sanchez was pronounced dead on arrival at University of New Mexico Hospital on Nov. 5, 1986. An autopsy later showed that she died of blunt trauma to the back or the abdomen.

Hurricane's wife, Angela Sanchez, then 34, and her boyfriend Ruben J. Lopez, then 44, were arrested. In September 1987 a jury convicted both of child abuse leading to death.

Hurricane said he had no choice but to go on and be strong. "She went to prison and suddenly I had to be the mother and the father of my children, '' Hurricane said. "You know it really touched me. Last Mother's Day my son Nelson called me and said `Happy Mother's Day, Dad. You were my father and mother.' ''

These days Al Hurricane has slowed down. Not nearly as much touring, just a couple of gigs a week. He says he's working on a new album but doesn't want to say when to expect it. "Whenever I say, it would be later,'' he said.

And the Godfather loves passing his music on to a younger generation. He recalled a recent show at a school in Las Vegas, N.M. The students he said were just as enthusiastic, if not more, than his regular audiences. "They were grabbing me, caressing me, '' he said. "I told the vice principal later that I felt like Elvis Presley. He told me, `You are our Elvis Presley.' " 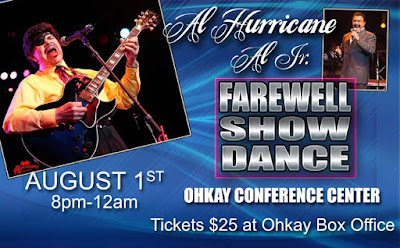 Here are some videos, starting with one that was produced by Natalie Guillen for The New Mexican two years ago: