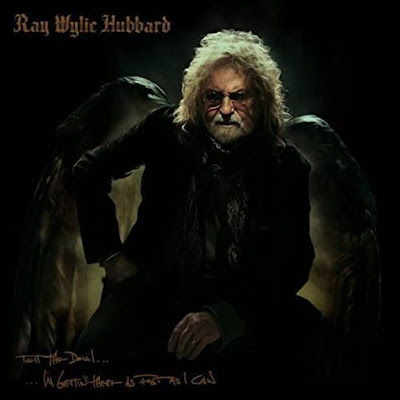 The arrival of a new album by Ray Wylie Hubbard is more than just getting the latest from one of your favorite songwriters. It’s like getting a message in a bottle from some shipwrecked sea dog from centuries ago, who somehow beat Poseidon in a poker game to gain immortality. Or it’s akin to stumbling across the taped confessions of an old train robber who went mad hiding out in the desert — but still has a lot of insightful stories to tell. Or maybe it’s like finding some old scroll with the original version of the Book of Revelations — before God edited all the jokes out.

Hubbard’s latest, Tell the Devil I’m Gettin’ There As Fast As I Can, is another fine revelation from the crusty old Texan, who has been on a pretty impressive roll since shortly after the turn of the century. Turning seventy hasn’t softened Hubbard’s edges. In fact, he only seems to get tougher and ornerier with age. Tell the Devil takes its place with other recent Hubbard gems like GROWL, Snake Farm, and Grifter’s Hymnal.

Like the Bible, the album starts out with the creation story — a song called “God Looked Around,” in which Hubbard, in his knowing drawl and slow-moving guitar, tells the story of the origin of the universe, Adam and Eve, and that pesky snake. My favorite part is when Adam wakes up to find a beauty with “ravishing curly raven hair” and tells God, “Whoa, Lord! You done answered my prayers.”

But the next song, “Dead Thumb King” goes right to the hoodoo, as the narrator, lest you doubt, explains he’s armed with “some dirt from Lightnin’ Hopkins’ grave,” “bones from an old black crow” and a “rattlesnake tail inside my guitar.”

The rocking “Old Wolf” is about an old blues singer in some dull club where “there ain’t a lot of action around the tip jar.” Hubbard introduces the shady clientele and people who work there, including the waitress (“Her name is Maggie, but they call her ‘Black Betty/Bam a lam, bam a lam!’ ” Hubbard sings, properly feeding the spirit of Leadbelly).

And in the title song, backed by the vocals of Lucinda Williams and mainstream country star Eric Church, he tells the story of some anonymous picker who plays a sunburst Gibson in an unnamed alt-country band (they opened for Son Volt in Los Angeles!) who’s in love with a woman “who can out-cuss any man.” (Speaking of cursing women, in “Dead Thumb King,” Hubbard growls, “I sleep with a woman who cusses in French”).

But the most moving, and most disturbing, love song here is the tragic “House of the White Rose Bouquet,” a minor-key acoustic tune with a foreboding mandolin in which the narrator lives in “a house of ill repute and sin” with “a young woman of desire” who “enjoyed the company of rakish men.” I won’t reveal what happens in this story, but it doesn’t end well.

The Prince of Darkness is the star of a five-minute picaresque tale called “Lucifer and the Fallen Angels.” He’s a hitchhiker who holds up Nervous Charlie’s Fireworks and All-Night Liquor Store, and may have killed a clerk in the process. But he also offers Hubbard some good advice about trying to get a publishing deal in Nashville. “Why go to Nashville when you ain’t never going to be mainstream?” the Devil advises.

I have the feeling that Lucifer’s not the first person to tell Hubbard that. But I don’t think he really cares, at least not anymore. And neither do his fans — as long as we can still hear that snake rattling from inside his guitar. Ray Wylie Hubbard’s website is www.raywylie.com. And check his Twitter feed at www.twitter.com/raywylie. 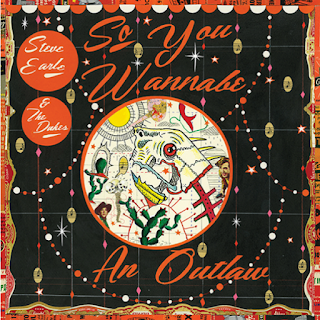 * So You Wannabe an Outlaw by Steve Earle & The Dukes. Let’s cut to the chase: This is the best Steve Earle album in well over a decade. Through most of the 1990s and into the first part of this century, Earle consistently delivered some of the finest country music, alt-country, country-rock, or whatever you want to call it.

But at some point his albums started becoming less and less interesting. It’s tempting to say — as others have — that it was when his records started getting more and more political, but that’s actually kind of lazy. Some of his political songs from the early aughts — “Rich Man’s War,” “John Walker’s Blues” (a sympathetic look at John Walker Lindh, the “American Taliban”), and my personal favorite, the cheeky “F the CC” — are excellent protest songs. But somewhere during his Jerusalem/The Revolution Starts Now period, the magic seemed to start wearing off.

But So You Wannabe an Outlaw is hot stuff. It’s definitely his most country album. Country fiddles and steel guitar dominate several cuts and there are vocal contributions from Willie Nelson on the title song, and, even better, from Johnny Bush (he wrote “Whiskey River,” kids) on “Walkin’ in LA,” which may be the honky-tonkiest song you’ve ever heard by Earle.

Other highlights include the jumping “The Firebreak Line,” an ode to hotshot forest firefighters; “If Mama Coulda Seen Me,” which, with its nasty guitar hook and prominent fiddle, can be considered as Earle’s “Mama Tried”; and “This Is How It Ends,” a break-up song that has country star Miranda Lambert providing heartbreaking harmonies.

By all means, check out the deluxe version of this album, which includes four covers of Willie and Waylon Jennings songs from the 1970s outlaw era. These aren’t groundbreaking by any means, but Earle’s joyful delivery makes for a fine tribute.

Steve Earle will appear in a benefit concert for the Jesuit Refugee Service/USA with Joan Baez, Patty Griffin, and other special guests at 7:30 p.m. Friday, Oct. 13, at the KiMo Theatre, 423 Central Ave. SW in Albuquerque. Check for ticket availability at www.kimotickets.com.


It's a live version of "Spider, Snake and Little Sun"


And what do you know, I found Steve Earle and Ray doing "Pancho and Lefty" together