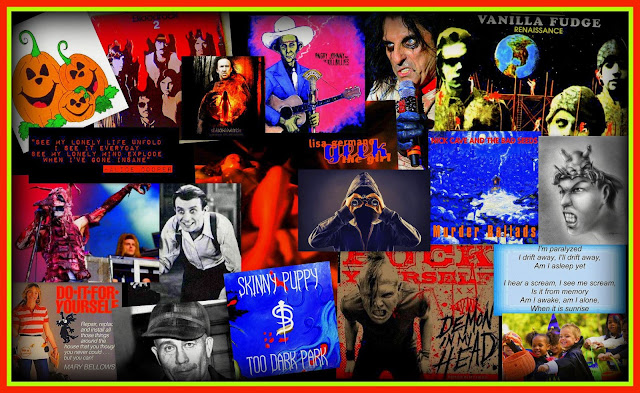 When people think of Halloween rock ’n’ roll songs, they normally think of whimsical novelty tunes dealing with the supernatural — ghosts, vampires, zombies, werewolves, witches, and Satan. But there are plenty of songs out there that are appropriate for Halloween because they are in themselves frightening and or at least deal with frightening — you might even say “monstrous” — topics like murder, insanity, blood, and gore. And while most of these don’t actually deal with spooks, many are spookier than the ones that do.

Here are some of my favorites:

* Too Dark Park by Skinny Puppy. Let’s start with some music that actually terrified me one night. Back in the summer of 1991, I was driving alone and trying to get back home to New Mexico. I’d taken a wrong turn south of Reno and somehow crossed back into California, where some redneck kid at a gas station recommended a shortcut back to Nevada — a two-lane road with lots of little hills and no sign of civilization. I popped in a cassette tape of Skinny Puppy’s then most recent album, Too Dark Park, which made this stretch seem even more otherworldly.

This Canadian group made what was called “industrial” music, complete with jackhammer drum beats; growled, shouted, and incomprehensible vocals; samples of people screaming; and an occasional woman’s voice saying “Scared?” As I drove along that dark, lonesome road, there were no lights. No gas stations, no motels, no other cars. And most disturbingly, no road signs saying how far I was from anywhere. As Puppy pounded in my speakers, I kept thinking how this area was the kind of place Charlie Manson’s Family might choose to live. I started envisioning Charlie’s dune-buggies zipping along the desert alongside the road. And to add to my anxious state of mind, every few moments a rabbit would dart across the road, only to die under my wheels.

Finally, sometime after the end of the album, there was a junction and a road that led me back to Nevada. I don’t listen to much Skinny Puppy these days. Every time I hear them, I go right back to that never-ending road and all those suicidal rabbits.

* “Season of the Witch” by Vanilla Fudge. On their 1968 album Renaissance, the Fudge took Donovan’s mysterious little psychedelic folk-rock song, slowed it down, and turned it into an intense nine-minute saga. What creeps me out is the very end of the track, where the singer screams, “God. God, hey! / If you can’t help us, you better listen! Please!” Then he pauses, and as the organ plays its spookhouse noodles, in a frightened voice, just above a whisper, the singer says, “Momma, I’m cold.”

* “Ballad of Dwight Fry” by Alice Cooper. Not only is this track from 1971’s Love It to Death Alice’s greatest song, it’s also his funniest song — and his scariest. It’s about a tormented guy locked up in a mental hospital. Since the first time I heard it, my favorite line is when he talks about how much he wants to see his four-year-old daughter: “I’d give her back all of her playthings / Even the ones I stole.”

* “The Kindness of Strangers” by Nick Cave & The Bad Seeds. One of many highlights on Cave’s 1996 album Murder Ballads, this song tells the sad story of an Arkansas girl who wanted to escape her podunk surroundings. The song begins, “They found Mary Bellows cuffed to the bed / With a rag in her mouth and a bullet in her head / O poor Mary Bellows.”

* “Brand New Girl” by Angry Johnny & The Killbillies. From the backwoods of New England, Angry Johnny is a master of hillbilly horror. This gruesome little tune, from his mid-’90s masterpiece Hankenstein, features a noirish sax and lyrics about an Ed Gein-like character who threatens his girlfriend: “I’m gonna skin you alive and make a suit out of your hide.”

* “A Psychopath” by Lisa Germano. Germano herself was stalked for years by an obsessed fan, and this tune expresses her fears during the ordeal. This song, from her Geek the Girl album is downright eerie, with Germano singing in a hushed, resigned voice, “I am alone, you win again / I’m paralyzed. ... I hear a scream, I see me scream / Is it from memory?” Adding to the terror is an actual police dispatch recording of a terrified woman calling the cops because the stalker is breaking into her house.

* “D.O.A.” by Bloodrock. This had to be the most popular radio hit on local radio the week I graduated from high school in the spring of 1971. It’s a tune so sludgy and so dreary that it makes Vanilla Fudge seem like Herman’s Hermits. With sirens blaring in the background, the singer tells the story of a survivor of an airplane crash. He’s bleeding, unable to move, and surrounded by dead passengers. Slowly, he realizes he’s dying as well.

* “Demon in My Head” by Joe Buck Yourself. Never before has a banjo sounded so evil. This is just a simple song from this Nashville maniac who’s also played with Hank Williams III and Legendary Shack Shakers. He sings of an inner struggle with his dark impulses, a battle he’s obviously losing. “There’s a demon in my head and he wants you dead. … Glory glory hallelujah.” That night in 1991, while I drove on that lonesome road listening to Skinny Puppy and killing daredevil rabbits, my biggest fear was that my car would break down and I’d come across some deranged redneck like the guy in this song.


For all you Spotify users, here's a handy dandy playlist which includes all but one of the above songs:

Also, check out my 10th annual Big Enchilada Spooktacular, which is up and creeping around the internet. I gathered bones from all over the rock ’n’ roll graveyard to create a monster of a show. Listen to it below and enjoy all the Halloween shows HERE.