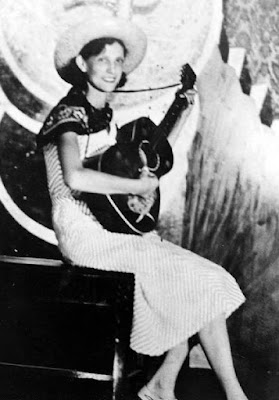 Here's a hillbilly singer from the 1920s who deserves more recognition. She was born Rosa Lee Carson but she was known professionally as "Moonshine Kate.

Born in Atlanta 108 years ago yesterday, (Happy birthday, Kate!) she was the daughter of one of the biggest hillbilly stars of his time, Fiddlin' John Carson.

Here's some bio from her page at the New Georgia Encyclopedia:

Carson made her recording debut in June 1925 at the age of fifteen, when she accompanied her father on guitar on four songs for OKeh Records. At the session she also recorded two solo sides, "The Lone Child," a Tin Pan Alley song about a ragged, wandering orphan boy, and "Little Mary Phagan," a sentimental ballad, composed in 1915 by her father, in response to the Leo Frank case.

For the next nine years Carson accompanied her father and the Virginia Reelers on tour and on recording sessions in Atlanta, New York, New Orleans, Louisiana, and Camden, New Jersey. In addition to the recordings she made with her father, she also recorded a handful of solos and duets on which she sang lead, including "The Drinker's Child," "Texas Blues," "The Last Old Dollar Is Gone," and "The Poor Girl Story." In 1928 Polk Brockman, OKeh's Atlanta records distributor and talent scout, gave Carson the nickname Moonshine Kate to enhance her hillbilly image, and she embraced it proudly for the rest of her life.

Moonshine Kate died in 1992, mostly forgotten except for by record collectors and fans of proto-country music.

Here are some of her songs. Let's start with "The Poor Girl's Story."

Here's a duet with her dad, which sports the best title in the bunch: "Ain't No Bugs on Me."

This one's my favorite: "My Man's a Jolly Railroad Man."

Here's the murder ballad about "Little Mary Phagan." It pins the murder on Leo Frank, who many now believe was framed for the crime because he was a Jew in the South.

True confession: I only got turned on to Moonshine Kate recently. The delightful Eilen Jewell (she's a former Santa Fe resident, ya'll!) covered Kate's "The Poor Girl's Story" on her latest album Down Hearted Blues. And here it is:

And hey, there's not one but two Moonshine Kate songs on the latest exciting Big Enchilada podcast -- "Railroad Man" by Kate, "Poor Girl" by Eilen. Check that out HERE 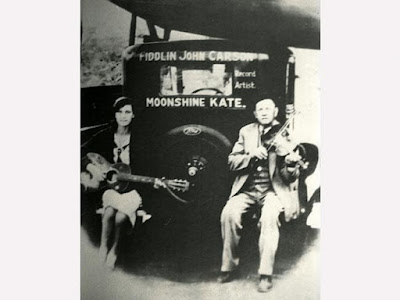