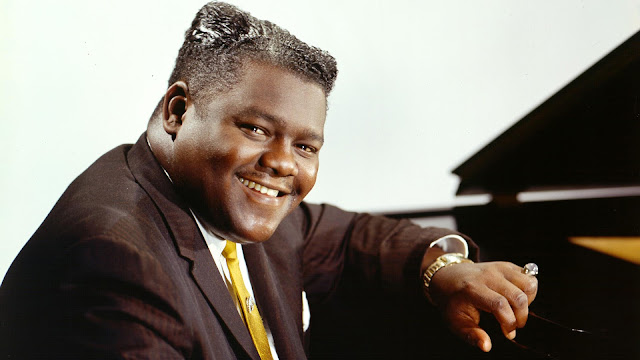 On Monday night, while editing one of my stories about the career of the late Al Hurricane, my editor Howard Houghton had a question about a reference to Fats Domino. Fats was in the story, of course, because Hurricane had toured with him briefly as a young man. Howard, a serious blues fan, asked whether we should identify Domino as an "early rock giant" as I had done in the piece, or an "early R&B giant." While either description is accurate, I argued that more people probably know him as a rock 'n' roll star.

"He's one of the last of the early rockers left," I said.

That was true Monday night.

Like Elvis Presley, Chuck Berry, Buddy Holly and the other founding fathers, I remember loving Fats Domino's music before I even started grade school. Maybe, being a fat kid myself I had a certain affinity for The Fat Man. But it's deeper than that. Just hearing him sing and play piano made me feel happy deep inside.

More than a quarter century ago, before my son was born, I wanted to name him "Antoine" to honor Mr. Domino. My then-wife wasn't quite sold. She thought such a French-sounding name might sound too affected, So we compromised and named him "Anton." It would be nice if I could say my son became a huge Fats Domino fan. He's not -- but he has an open mind and a healthy curiosity about music, so maybe one day.

By the way, as soon as I learned about Fats' death I sent Howard a link to the New Orleans Time Picayune obit. When I got to work, he threw this part of the story right into my face:

Mr. Domino was one of the Rock and Roll Hall of Fame's first 10 inductees.

But in a 1956 interview, Mr. Domino said, "What they call rock and roll is rhythm and blues, and I've been playing it for 15 years in New Orleans."

Lord keep you, Mr. Domino. Here are some of my favorite (and not overplayed) tunes from the late giant. Here's his first hit, "The Fat Man."


The Beatles always cited Fats Domino as a major influence. The first time I heard "Lady Madonna" in 1968 I thought it was an obvious tribute to the man from New Orleans -- and Paul McCartney has admitted as much. I guess Fats liked it too. Just a few months later he released his own version.

In the mid 1980s, Domino teamed up with another Louisiana star, Doug Kershaw to cover "Don't Mess With My Toot Tooty," a song that not long before had been a hit for zydeco singer Rockin' Sidney. (Check out the guest appearances by David Carradine and Louisiana Gov. Edwin Edwards in this video.

Finally, here's a sweet tribute to The Fat Man from Albuquerque poet Hakim Bellamy, which he released Wednesday after Mr. Domino died.