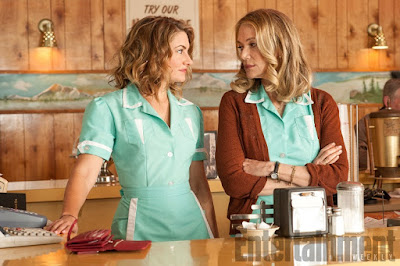 She's more than just a server of food.

In American song, the waitress is a friend and frequently a fantasy lover of truckdrivers, starry-eyed poets, lonesome drifters and other lost souls on the Lost Highway.

She's appeared in the work of some of my favorite songwriters. Below are just a few examples


Loudon Wainwright III has some advice that any waitress would appreciate in a song "for Patty and all the girls ..." Tip that waitress!"

The Roches sing "Mr. Sellack" from the point of view of a waitress having to grovel to get her job back.

Here's a classic by Santa Fe's own Terry Allen, "The Beautiful Waitress."

Sometimes waitresses fantasize about their customers, at least in the fantasies of Dan Hicks. Here's "Sweetheart (Waitress at a Donut Shop)," sung by Maryann Price.