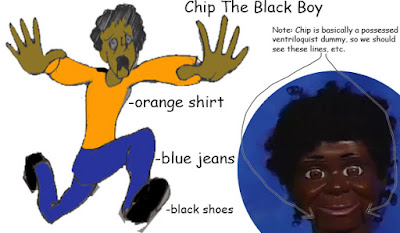 If you don't believe me, Hart says so himself on his website.

He sometimes performs with his son, Chip the Black Boy.

Yes, Chip is a ventriloquist dummy.

And for about 20 years, Hart had his own public access religious show in Los Angeles, The Junior Christian Teaching Bible Lesson Program, But he got better known from his appearances on Tim and Eric Awesome Show, Great Job! on Adult Swim.

You can find Hart's music, including a couple of Chip albums on his Bandcamp site.

And you can see some of Hart's videos below:

Chip appears is this recent video by Hart, a love story about a beautiful Insect Woman, (There's another version of this classic HERE.)

Chip's not on this one, but I felt the message is important enough to include here.

And here's a promo for a DVD collection of The Junior Christian Teaching Bible Lesson Program. (You can buy it on Hart's website.)