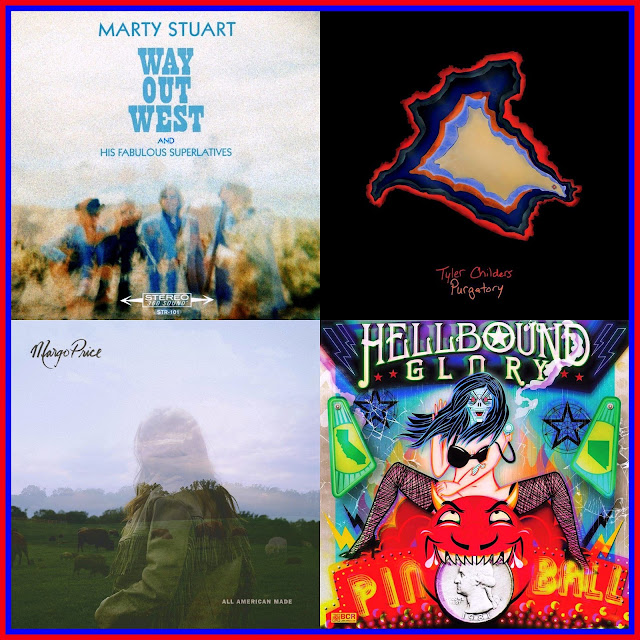 A version of this was published in The Santa Fe New Mexican
Dec. 1, 2017

* Purgatory by Tyler Childers. Let’s get to the point: This is the year’s best album by a young country singer. Hands down. It’s also the best Sturgill Simpson album of the year, as Simpson co-produced the record for his fellow Kentuckian Childers.

This twenty-six-year-old guitar slinger writes and sings songs that sound timeless. Covering evergreen hillbilly themes, he tells tales of good moonshine, bad drugs, an all-seeing God, a powerful devil, and the joys of love and sex. Some tracks have a pure outlaw country sound, while some come right out of the world of bluegrass.

One of my favorites is the fiddle-and-banjo-fueled title song, a fast-moving hoedown concerning a hillbilly kid looking for salvation from his religious girlfriend. Each verse ends in the refrain “Catholic girl, pray for me/You’re my only hope for heaven.”

The most impressive musical moment here comes in the sweet love song “Honky Tonk Flame.” It starts out as a kind of clunky waltz, but evolves into an extended fiddle/guitar showdown.

The whole album consists of just 10 songs and weighs in at a modest 37 minutes (pretty much how long albums used to be when I was a lad). So it leaves you wanting a little more. But something tells me there’s a lot more to come from young Tyler.

* All American Made by Margo Price. I was a latecomer to Price’s solo debut, Midwest Farmer’s Daughter (released last year). But I soon came to realize that it’s one of the best country albums released in recent years. I even got to see Price in concert in Austin earlier this year — and she was fantastic. Maybe my expectations were too high, but the new album just doesn’t measure up to her first one. I have to admit, I’m slightly disappointed.

But it’s still a good record with plenty of worthy songs. The first two tracks, “Don’t Say It” and “Weakness,” are rocking little tunes. I love this bit of advice in the former: “Don’t blame me for what you did to yourself/Don’t fall in love if you’re in it for your health.” And “Learning to Lose,” her duet with Willie Nelson, is beyond lovely. It sounds so much like a long-lost Willie weeper I was surprised to learn that Price, not Nelson, wrote it.

There are more than a little politics on All American Made. “Pay Gap” is about the fact that womenfolk are paid less than the men. And on “Heart of America,” Price sings about a subject dear to her: the corporate takeover of family farms and the brutal effect it had on families like her own.

All American Made ends with the title song, a sad tune in which Price contemplates the future of the country: “I wonder if the president gets much sleep at night/And if the folks on welfare are making it all right/ I’m dreaming of that highway that stretches out of sight/That’s all American made.”

* Pinball by Hellbound Glory. This band is the domain of a Reno singer born Leroy Virgil Bowers. (With a name like “Leroy Virgil,” how could he not end up as a country singer?)

The group rose out of the great underground country scare of seven or eight years ago — a “movement” whose standard-bearers included punk- and metal-influenced acts like The Goddamn Gallows, The .357 String Band, and, of course, Hank 3. But Hellbound sounds more like straight country than many of their wilder, heavily tattooed, heavily bearded contemporaries.

Pinball, which was produced by Shooter Jennings, is filled with good country songs. Lots of the tunes are soaked in lyrics full of “whiskey and hell-raisin’ women” (that’s right out of the good-time “Sun Valley Blues #3 (Bloodweiser).”

The main song that first grabbed me here was “Vandalism Spree,” in which Leroy sings, “Baby how’s about you and me/go on a vandalism spree/Burn down the Dairy Queen/Maybe rob the cash machine.”

* Way Out West by Marty Stuart & His Fabulous Superlatives. For decades, Mississippi native Stuart has been known as one of Nashville’s most respected pickers and singers. He’s been a sideman for bluegrass giant Lester Flatt as well as Johnny Cash (who was his father-in-law for a time).

Back in the late ’80s and early ’90s, Stuart seemed to be heading toward a comfortable career in mainstream country. Except that he had this artistic integrity thing that got in the way. He’s a country traditionalist who is blessed — or cursed — with musical curiosity and a penchant for experimentation.

And those qualities are what drive Way Out West. On this record, you hear echoes of Marty Robbins, Hag, Buck, The Byrds, and Link Wray, as well as a quick wink to younger contemporaries like Sturgill Simpson. And in the title song — a series of spoken-word vignettes about pill-popping characters from the vast California underbelly set against a dreamy, reverb-heavy soundscape — Stuart sounds almost like a clear-throated Tom Waits. Like a mad scientist of hillbilly music, he seamlessly blends surf music, Bakersfield country, Mexican music, and — getting back to that title song — psychedelia.

The first great Santa Fe concert of next year most likely will be Marty Stuart & His Fabulous Superlatives at the Lensic Performing Arts Center on Jan. 20, 2018. For more information, CLICK HERE

Margo Price on The Daily Show

And a little psychedelic country with Marty