Christmas is coming, and America’s annual explosion of holiday blitz of glitz and other stuff is in full gear. And music, from the sublime to the syrupy, plays no small part in it. There is no escaping all the seasonal songs about Baby Jesus, Santa Claus, snow, and sleigh bells. From sappy sentimentality to cringe-worthy novelty tunes to songs professing hardcore religious zealotry — hark the herald hucksters sing!

And you can’t complain about it, you communist Grinch, you malcontent Scrooge. It’s for the children. It’s for the health of the economy! So get with the program. It’s best for everyone if you just embrace the Christmas craziness and join in the cheer.

Here are a few insane Christmas albums to keep you sane through it all. 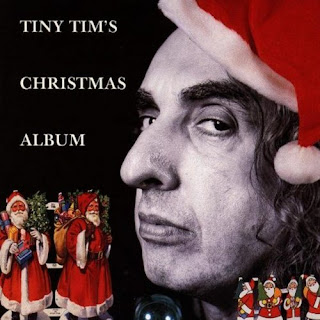 * Tiny Tim’s Christmas Album. Just about everyone my age remembers Tiny Tim. But it occurred to me that younger folk probably don’t know Tiny Tim from Fibber McGee and Molly.

A quick Tiny Tim primer: Back in 1968, a war-weary nation shared a collective laugh at a strange, slightly creepy crooner who plucked a ukulele and warbled in an unsettling falsetto — Herbert Khaury, aka Tiny Tim. At first Tiny might have thought we were laughing with him, as he crooned “Tiptoe Through the Tulips” on Rowan and Martin’s Laugh-In and revived “On the Good Ship Lollipop” while the nation’s youth sang “Street Fighting Man.” But no, we were actually laughing at him. Tiny’s career pinnacled when he got married on The Tonight Show. It was obvious that he was a carnival freak and we, the public, were the rubes cramming into the sideshow tent to gawk.

The most puzzling thing about his Christmas album is that Tiny didn’t get around to making a full-press effort to cash in on the holiday until the 1990s. This was released in 1996, the same year he died.

This collection includes several Christmas chestnuts like “Rudolph the Red-Nosed Reindeer” (sung in his trademark falsetto) and White Christmas” (showing off his warbling baritone). And for some reason, there are a handful of tunes that have nothing to do with Christmas. The most surprisingly relevant song here is his take on “Silent Night,” during which he launches into an angry sermon against Christians who don’t act very Christian. “Hypocrites!” he snarls. “Professing His name! Fornicating with children! Fornicating with young girls!”

Roy Moore, the ghost of Tiny Tim is on to you!

Sadly, this record doesn’t include Tiny’s best, and most tasteless, Yuletide classic, “Santa Claus Has Got the AIDS This Year.” I've embedded it below. 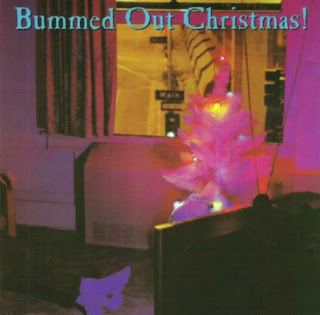 * Bummed Out Christmas by various artists. Back in the late ’80s, when Rhino Records was one of the coolest labels around, they used to release some wonderful, irreverent compilations, such as this one. It’s full of songs about people having a hard time finding any Christmas cheer.

There is a weeper by The Everly Brothers called “Christmas Eve Can Kill You,” as well as one of George Jones’ saddest songs, “Lonely Christmas Call.”  There is the heart-stopping lonesome soldier lament, “Christmas in Viet Nam” by the soul duo Johnny & Jon.

Some of my favorites are a couple of fine old ’50s R&B songs about holiday drunkenness — “Santa Came Home Drunk” by Clyde Lasley & The Cadillac Baby Specials and “Christmas in Jail” by The Youngsters (a tune that many local folks may associate with the cover by The Soul Deacons about a decade back). 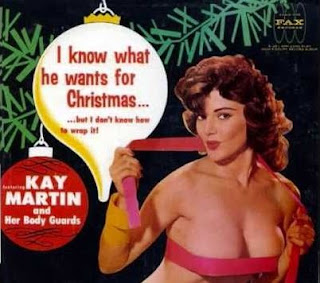 * I Know What He Wants for Christmas ... But I Don’t Know How to Wrap It! by Kay Martin and Her Body Guards. Back in the 1950s, they used to call risqué records like this “party album.” Martin was a former model who claimed she’d posed for Playboy. (Though I’ve read several accounts that say she’s not the scantily clad redhead on the album cover.)

With her kittenish voice and a dominant electric organ that sounds as if it were stolen from a roller rink, Martin purrs through suggestive holiday numbers like “Santa’s Doing the Horizontal Twist” and “Santa’s Going to Be Late Tonight.” 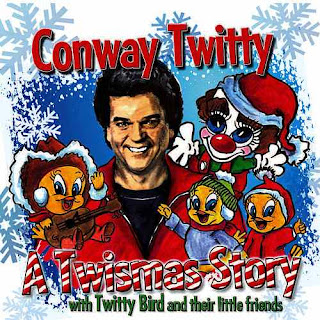 *A Twismas Story by Conway Twitty With Twitty Bird & Their Little Friends. Here is a little Christmas recycling. I wrote about this bizarre holiday album 10 years ago in this very publication. First released in 1983, it was reissued in 2007 to shock a new generation. A decade later, this album is just as frightening now as it was then.

A Twismas Story goes well beyond normal Christmas albums by country stars you find in bargain bins at supermarkets, drugstores, and truck stops this time of year — at humiliatingly low prices. Your average Nashville holiday clunker features disturbingly similar overproduced, underinspired, twangy takes on the same 20 or so holiday standards. But the late Twitty and his imaginary friends went above and beyond. This is so tacky, so cheesy, so over-the-top, and so overstuffed with Christmas corn that it’s a perverse classic.

Twitty Bird — who was Conway’s Tweety-like cartoon mascot (how did he not get sued by Warner Bros.?) — is portrayed here by the singer’s granddaughter. The “Little Friends” are sped-up “chipmunk” voices. They all chatter insanely and sing about Santa, Frosty, Rudolph, etc.

I stand by my advice from 2007: Friends don’t let friends take hallucinogenic drugs and listen to A Twismas Story at the same time.

Proceed at you own risk! Wacky, tacky Xmas songs below:

Here is Tiny Tim's playful spoof about a virus that would kill millions.

This song, from Bummed Out Christmas actually is pretty bitchen

Yes, the great Conway stooped to this. For the children.