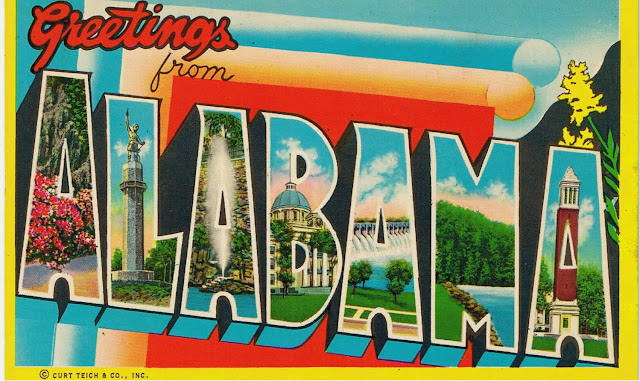 On this day in 1819, Alabama was admitted to the United States of America as the 22nd state.

And just a couple of days ago, Alabama apparently decided it was time to rejoin the U.S.

Yesterday I noticed on Facebook that a lot of my friends were posting the words "Sweet Home Alabama" to celebrate Democrat Doug Jones' victory over Republican Roy Moore, a former state Supreme Court judge and a former creepy guy at mall.

I support the sentiment, but "Sweet Home Alabama"? Really? There is a rich history of great American songs about Alabama that goes way beyond Lynyrd Skynyrd.

Here are a few of them. Let's start with "Alabama Bound" by Lead Belly

The Delmore Brothers sang this one, "Alabama Lullabye."

But the greatest of all Alabama songs has no words at all. This of course was John Coltrane's song "Alabama" which the great sax man wrote in response to the Sept. 15, 1963 bombing of the 16th Street Baptist Church in Birmingham, which killed four little girls -- Addie Mae Collins, Carol Denise McNair, Carole Robertson, and Cynthia Wesley.

Here's a live version of Coltrane performing "Alabama" in December, 1963 on a public television show called Jazz Casual. He's playing with my favorite Coltrane band -- McCoy Tyner on piano, Jimmy Garrison on bass and Elvin Jones on drums.  The entire episode can be seen HERE.

By the way, the good people of Alabama just elected to the U.S. Senate a man who successfully prosecuted two of the Birmingham church bombers.

Somewhere in the universe, Coltrane smiles.