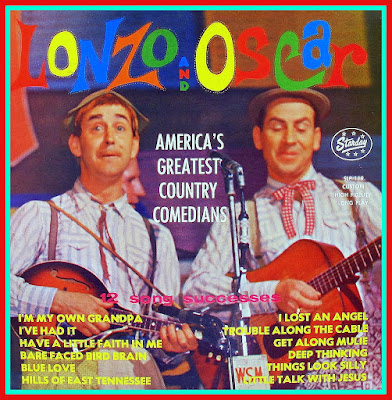 Along with the better-known Homer & Jethro, Lonzo & Oscar, who began their career in the 1940s opening for Eddie Arnold, epitomized cornball country comedy on the Grand Ol' Opry in the 1950s.

Kentucky native Rollin Sullivan portrayed Oscar, the goofy-looking hillbilly who played a mean mandolin. The role of Lonzo, the straight man of the band, was something of a revolving door. A guy named Lloyd George was the original Lonzo. He sang on their big hit "I'm My Own Grandpa" in 1948. But he left the act in 1950.

In the clips below, which are from the 1950s, Lonzo is Johnny Sullivan, Rollin's brother.

Don't ask me what "Cousin Jody's" real name is. The guy gives me the willies (though he's a fine lap steel player.)

On with the music!

Here is one I first heard performed by Hank Thompson, "No Help Wanted"

This is called "Hole in the Bottom of the Sea"

Little Jimmy Dickens introduces the boys for their parody of  "16 tons."