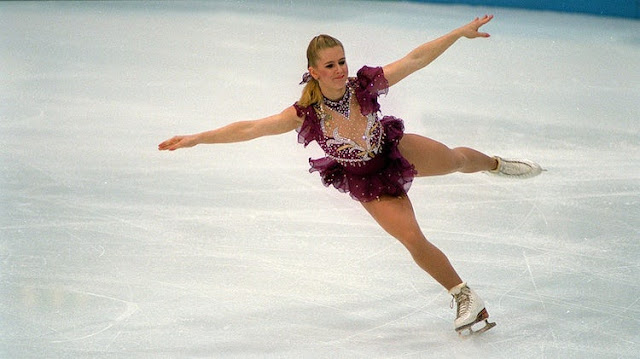 America's sweetheart, Tonya Harding, is back in the national consciousness once again thanks to an upcoming biopic I, Tonya,  starring Margot Robbie that looks back on the life of the champion figure skater from the wrong side of the tracks.

Anyone remember why Tonya got famous?

In 1991 Tonya Harding won her first national skating title and became the first woman to complete a triple axel in competition.

In January 1994, Harding earned notoriety when her ex-husband, Jeff Gillooly, hired a hitman to assault fellow U.S. figure skater Nancy Kerrigan. The attack seriously bruised Kerrigan's kneecap and quadriceps tendon, and prevented her from participating in the U.S. Championships.

Harding pleaded guilty to hindering the investigation into Kerrigan's attack, which allowed her to avoid jail time. Under the plea bargain, Harding was stripped of her '94 national title and banned from competing in the U.S. for life. Despite her knee injury, Kerrigan went on to win the silver medal at the 1994 Olympic Games.

Kerrigan was clearly the victim in this story. But while there is still dispute about whether Harding was responsible for the attack, Harding became a national villain, hated and reviled.

But guess which one the nation's songwriters preferred. As one of my favorite college professor posed to a literature class, "Who do we love, Pat Garrett or Billy the Kid? Jesse James or the dirty little coward who shot Mr. Howard?"

In short, I'm not aware of any songs about Nancy Kerrigan. But here are three about Tonya.

Singer/songwriter Sufjan Stevens recently released two versions of a song he wrote for Tonya. In an essay on his record label's website, he wrote:

I’ve been trying to write a Tonya Harding song since I first saw her skate at the U.S. Figure Skating Championships in 1991. She’s a complicated subject for a song partly because the hard facts of her life are so strange, disputable, heroic, unprecedented, and indelibly American. ...

Tonya Harding’s dramatic rise and fall was fiercely followed by the media, and she very quickly became the brunt of jokes, the subject of tabloid headlines and public outcry. She was a reality TV star before such a thing even existed. But she was also simply un-categorical: America’s sweetheart with a dark twist. But I believe this is what made her so interesting, and a true American hero. In the face of outrage and defeat, Tonya bolstered shameless resolve and succeeded again and again with all manners of re-invention and self-determination.

He reportedly submitted the song for I, Tonya, but it wasn't used in the film.

But I don't like Stevens' lonesome ode a fraction as much as I love Loudon Wainwright's "Tonya's Twirls." I first saw him perform it at a Santa Fe concert about a year and a half after the Kerrigan attack.

It's truly a subversive little ditty, that starts off with a quick yuk at the expense of Hardin's "body guard" Shawn Eckardt, and includes a little bit of the " puns, punch lines and light-hearted jabs" Sufjan Stevens says he tried to avoid.

But once you're drawn into the song Wainwright hits you with the sad tale of class struggle -- the lower-class girl in that world of prissy little ice princesses.

... she was your parents' worst nightmare: the slut who moved next door
From the wrong side of the track, she liked the boys more than the girls
With their gliding and their sliding and their girlish dainty twirls-

And then Wainwright pulls back and uses the story to decry the corruption of a fun little activity for "giddy, slipping, sliding, laughing, happy little girls" that grew to be more about corporate sponsorship deals and American nationalism.

And I just learned that the immortal Tiny Tim wrote a little song for Tonya not long after the knee-capping incident. Dedicated to "Miss Tonya Harding," Tiny's song has some invaluable advice here:

Though you are sighing, though you are crying and everything has gone wrong
The world is waiting, keep right on skating
Skate to the iceskater's song.