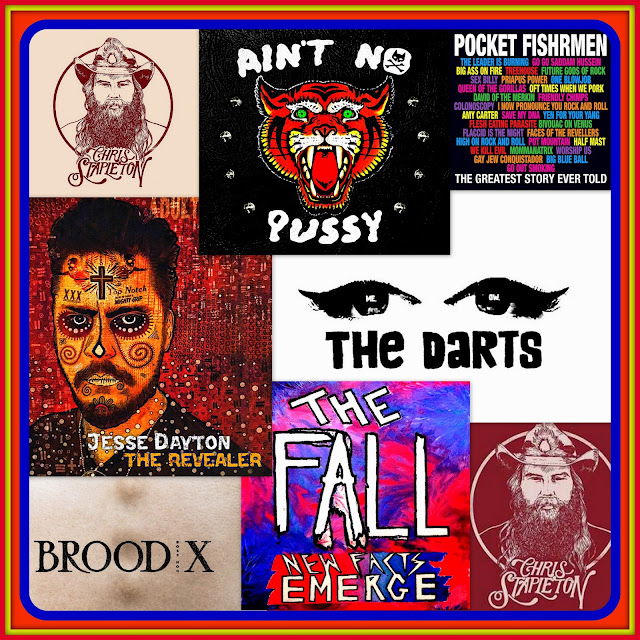 Here’s a bunch of albums from 2017 that somehow I never got around to reviewing. These are the ones that got away — almost.

* From a Room (Volumes 1 and 2) by Chris Stapleton. Through the years, I’ve done more than my share of raging against the evil corporate overlords of country music and their evil corporate award shows that seem to honor lamer and lamer music every year. But in 2017 there was a surprise. A soulful-voiced weirded beardo from Kentucky named Chris Stapleton managed to win the Country Music Association’s awards for male vocalist of the year and album of the year. Indeed, Stapleton is a rare bird who has won praise from — and has sold records to — fans of mainstream country, traditionalist country, and alternative country alike. The first volume of From a Room, released last May, snagged him that CMA album of the year prize. Don’t be surprised if Volume 2, released in November, does the same thing this year. Both volumes are full of good, basic songs, mostly originals, seeped in ’70s outlaw country and just enough Southern rock to keep it lively. Stapleton deserves some kind of award for “Up to No Good Livin’,” in which he declares himself “the Picasso of paintin’ the town.”

* Brood X by Boss Hog. There was no new record by the Jon Spencer Blues Explosion last year, but this is the next best thing. Spencer plays guitar and contributes some scattered vocals with Boss Hog, but his wife (and former Pussy Galore bandmate), Cristina Martinez, is the driving force, and she’s on fire here. It’s been 17 years since Boss Hog’s previous album, due to Martinez taking a long break to raise some kids. But she and Spencer make their punk/blues/funk/no-wave noise sound more urgent than ever. Throughout most of the record Martinez sounds appalled and alarmed by the state of the world. For instance, “Elevator” (on which she repeatedly sings, “This is an emergency”) sounds like a six-alarm crisis in progress. But the funky keyboards by Mickey Finn make the emergency sound kind of fun. And on “Rodeo Chica,” Spencer and Martinez duet like a punk-rock Sonny & Cher. “What’s wrong, baby?” Spencer sings. Martinez answers bluntly: “Everything!”

* New Facts Emerge by The Fall. I was sad last year when I learned that Mark E. Smith — frontman for The Fall and the king of rant ’n’ roll — was suffering from severe health problems. He was doing some shows in a wheelchair, and by December he had to cancel a bunch of dates. But somehow in 2017, Smith and company managed to release this spirited record. He still sounds like a crazy old wino who loves to scream at you on the bus, his voice ranging from a menacing growl to a desperate rasp. That instrument is showing signs of wear and tear, but the craziness is still there. His current band is muscular enough to drive home Smith’s message. Whatever the heck that might be.

* The Greatest Story Ever Told by Pocket FishRMen. This classic punk band from Austin has flown under the radar for three decades. With singer Brant Bingamon, the FishRMen rerecorded 30 of their best-loved songs. They’re filthy, irreverent, and hilarious, with titles like “Go Go Saddam Hussein,” “Oft Times When We Pork,” “Amy Carter,” “Flesh Eating Parasite,” “Queen of the Gorillas,” and “Colonoscopy.” I realize most of these songs are pretty old, but when I heard “The Leader Is Burning,” I had to check to make sure it wasn’t a new one. Indeed, it’s from the late ’80s, but it sounds pretty relevant to current events.

* The Revealer by Jesse Dayton. Here’s another Austin act. Dayton is a fine country singer, but his head sometimes drifts into the punk-rock clouds. His latest album is a showcase of his country-rock bona fides. “Daddy Was a Badass” is a sincere tribute to his dad (who rode a Harley and financed his own college education by gambling), while the high-energy “Holy Ghost Rock ’n’ Roller” is about “the devil’s music” saving his life from fuddy-duddy fundamentalism. And there’s a new version of “I’m at Home Getting Hammered (While She’s Out Getting Nailed),” a song Dayton originally recorded with Banjo & Sullivan, a long out-of-print musical project that sprouted from Rob Zombie’s 2005 movie The Devil’s Rejects.

* Ain’t No Pussy by Pussycat & The Dirty Johnsons and Me.Ow by The Darts. Girl punk lives, and it has a nice home on Dirty Water Records. The first of these is a worthy follow-up to Pussycat’s Dirty Rock ’n’ Roll, the 2013 album that first brought the English trio to my attention. If anything, Ain’t No Pussy is harder-edged than the previous record. In the very first verse of the very first track, the title song, singer Puss Johnson, in so many words, threatens to use her boot to turn some poor guy into a permanent soprano. Puss isn’t always so harsh, though. “Surrender My Heart,” with its jungle beat and crazy guitar solo, is probably the closest thing here to a love song. And “Suneal,” which borrows the melody of Little Richard’s “Lucille,” is downright joyful.

The Darts is an all-female quartet from Phoenix. If there was an award for best use of a Farfisa organ, Darts singer and keyboardist Nicole Laurenne would be a shoo-in. Her Farfisa provides a nice garagey, psychedelic backdrop for the songs. Highlights include the sexy mysterioso opener, “The Cat’s Meow”; the spooky, bluesy “You’ll Bring Me Flowers”; and “Get Messy,” a giddy outburst which is as bright as “Flowers” is dark.