A version of this was published in The Santa Fe New Mexican
Dec. 9, 2016 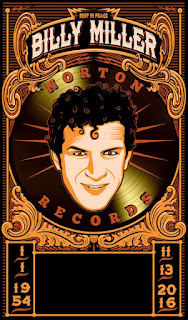 The recent passing of Norton Records co-founder Billy Miller set me to thinking about how much I appreciate great independent record labels. I assume Norton will remain a national treasure under the direction of Miller’s talented and visionary widow Miriam Linna.

But Miller’s death also makes me appreciate other great labels as well. Loyal readers of this column have seen me sing the praises of Norton, as well as others like Bloodshot, Saustex, Voodoo Rhythm, and Off Label.

Another one that deserves to be high on that list — especially for us fans of garage-punk and modern rock ’n’ soul — is Dirty Water Records. It's a British company named after The Standells’ major 1966 hit and an offshoot of the Dirty Water Club in London, which operated for more than a decade out of a venue called The Boston and still produces occasional live music events at various London spots. 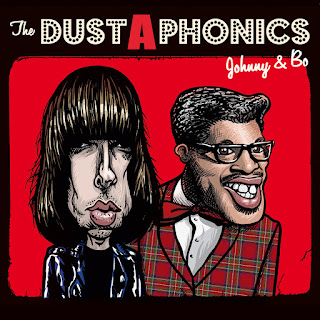 I’ve written in the past about Dirty Water recording artists like King Salami &The Cumberland 3, Los Peyotes, and Hollywood Sinners. Here’s a look at several recent Dirty Water releases.

* Johnny & Bo by The Dustaphonics. Next only to King Salami, this band is probably the most exciting Dirty Water act in the label’s 12-year history. Featuring the guitar of the French-born Yvan Serrano-Fontova and the full-throttle vocals of Hayley Red, The Dustaphonics combine surf music, punk, and R&B (and a few echoes of ska, soundtrack music, and exotica) into a unique hopped-up sound.

The Johnny and Bo in the title refer to Ramone and Diddley, who are in Serrano-Fontova’s and Red’s personal pantheon of music heroes. The title song, complete with the famous Bo beat and a reverb-heavy guitar, has a refrain combining “Hey, Bo Diddley” and The Ramones’ signature “Gabba gabba hey.”

There’s also a high-spirited tribute song celebrating the late Tura Satana, the star of Russ Meyer‘s sex-sational 1965 classic, Faster, Pussycat! Kill! Kill!. Before her death in 2011, Satana collaborated with Serrano-Fontova on some music projects, including co-writing an early Dustaphonics song, “Burlesque Queen.” Here’s a DJ tip: Play this alongside The Cramps’ version of “Faster Pussycat.”

Other highlights here are a sped-up cover of The Specials’ 1979 ska-revival hit “Gangsters,” a tune called “Listen to the Showman Twang” (featuring Red calling out idols including Dick Dale, The Ventures, Mickey Baker, Magic Sam, and The Trashmen), and not one but two versions of a song called “You Don’t Love Me Anymore” — one with a horn section and one without.

I’m just confused as to why they’re called The Dustaphonics. There ain’t nothing dusty about these sounds. 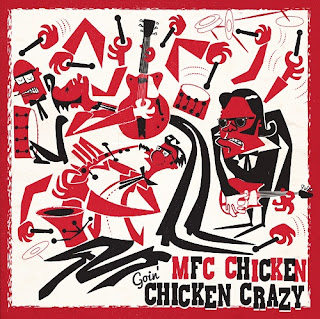 * Goin’ Chicken Crazy by MFC Chicken. This band leans heavily on soul and R&B, as filtered
through 1960s Northwestern U.S. bands like The Sonics and The Wailers. Led by sax man/singer Spencer Evoy and guitarist Alberto Ziol, this album sounds like a party that has no intention of ever ending. That’s probably most evident in the songs “Hooch Party,” “Blackout Drunk,” and the Chicken’s raucous cover of The Toppers’ 1954 novelty, “Baby Let Me Bang Your Box.”

The group celebrates simple joys like having a new pair of socks, roast potatoes, and even hair-care products.

“I Ain’t Crying (That’s Just Pomade in My Eyes)” pokes fun at the retro culture that often surrounds music like this. “When my girl up and left me, she took my good pomade/Now I’m left with the cheap stuff, the kind that ain’t well made.”

There are so many chicken songs here — “Goin’ Chicken Crazy,” “Chicken in a Hurry,” “Big Cluckin’ Mistake” — I couldn’t help but be reminded of Hasil Adkins’ album (on Norton Records) Poultry in Motion. 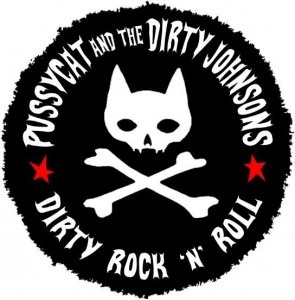 * Dirty Rock ’n’ Roll by Pussycat & The Dirty Johnsons. This is a high-energy, big-personality English trio, led by singer Puss Johnson, whose voice is a joyful experience that reminds me of KatieJane Garside of Daisy Chainsaw. (Remember “Love Your Money”?)

Even so, some songs on this album deal with gruesome themes. There’s the opening song “Burying the Bodies.” Then in “Hell Bent,” Puss sings of making boots out of a victim’s skin (and shrinking his head and grinding his bones), while the near-metallic “Souvenir” contains romantic lyrics such as, “They’ll find you in a ditch somewhere/bound and broken with no hair/I kept it as a souvenir.”

My favorite songs here are “Why Do You Hate Me,” “Hideous” (a rocking tirade against fashion-obsessed, celebrity-worshiping conformists), and best of all, “Still Livin’ With Mum and Dad,” an ode to eternal youth. “Hey why don’t you come over/and play on my Game Cube/We can listen to punk rock, baby, and make out in my room.”

And there’s even a song about the cat’s mortal enemy: “Dirty Li’l Dog.”

* Mystery Lover by Archie & The Bunkers. This band mostly just rants against hippies and 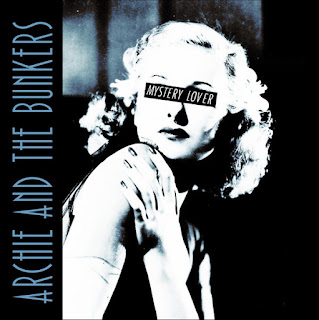 liberals
and demands their wives stifle themselves. Not really. Actually I’m a little puzzled about why this group — a pair of teenage (!) brothers from Cleveland — chose this name. But I don’t care if they call themselves Herman’s Hermits — these youngsters have created some amazing music here. With Cullen O’Connor on organ and Emmett O’Connor on drums (and both contributing vocals), these youngsters rock hard beyond their years.

The omnipresent organ gives the sound a spooky feel that reminds me of Mr. Quintron, the New Orleans keyboardist whom I first came to love through his collaboration with The Oblivians.

Alas, this is only a six-song EP. One of the songs is a cover of “Sunglasses After Dark,” first done by rockabilly Dwight Pullen and later by The Cramps.

For the sake of all us  dingbats and meatheads, I hope these guys have a long future in music and stay true to these roots. can find out more at.

Now let's enjoy some videos, shall we?