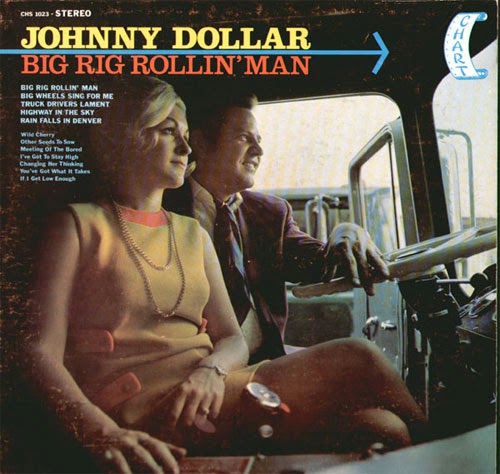 We all know Johnny Cash and Johnny Paycheck. But less well known is a singer from Kilgore, Texas named Johnny Dollar. And yes, according to his biography at the Rockabilly Hall of Fame, "John Washington Dollar, Jr." was the name he was born with on this day in 1933.

In 1952, Johnny started recording for Shelby Singleton's D Records and cut a record called "Walking Away" at his own expense. When nothing happened with the disc, he became a deejay at stations in Louisiana and New Mexico,  formed a band called The Texas Sons, and began performing in Shreveport at the famous Louisiana Hayride, which was regularly broadcast over radio station KWKH. He tried his hand at releasing a record again, this time for Winston Records, called "Lumberjack", but again it failed to garner much attention. By 1957 or '58, he drifted back to Texas where he took up the rockabilly style that Elvis Presley and others were making popular ...

By the way, I've looked but I haven't found exactly where in New Mexico Dollar worked as a DJ.

In Dallas, Dollar became part of the cast for the influential country radio show Big D Jamboree on KRLD in Dallas. During this time he began recording a bunch of rockabilly songs in Dallas. Among them was "Action Packed," which would become a hit for another Jamboree regular, Ronnie Dawson (under the name Ronnie Dee). Dollar also did this one, also covered by Dawson. It was first recorded by Elroy Deitzel (under the title "Rock-N-Bones") and --decades later -- by The Cramps and Flat Duo Jets.

But few people knew about his rockabilly records.

An unbeatable combination that should have (and surely would have) made Johnny Dollar famous if the recordings had ever been released on record to the public. Mysteriously, however, they were not and instead they remained trapped in a Bekins Moving Company box on old reels of Scotch audio tape in the closet of a north Dallas home for almost forty years until their discovery in 1997.

Frustrated with his lack of success in the music biz, Dollar hung it up and began selling insurance in Oklahoma. But bu the mid '60s, he met Ray Price, who helped reboot his career in country music. Some of his records were released under the name of "Johnny $ Dollar."

By the '70s Dollar was working more as a producer than a singer. But by the  '80s, his story became tragic:

Unfortunately, after he divorced his fourth wife, Carole Dollar, he appeared to lose his way, became depressed and began to drink heavily. According to his nephew, Dr. Charles Yeargan, Johnny was diagnosed with throat cancer in the early 1980s and underwent an operation to remove the cause of the disease, effectively destroying his voice in the process. The loss of his voice and the subsequent reappearance of the cancer by the mid-1980s plunged Johnny into an even deeper depression, resulting in more drinking bouts and ending with him taking his own life on April 13th, 1986.

But let's remember the good times, Here are some of my favorite Johnny Dollar country songs.