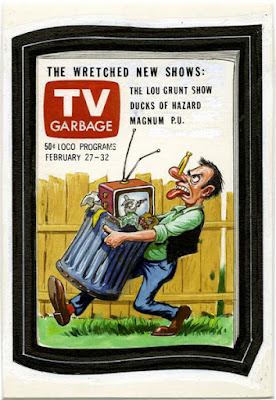 On this day 57 years ago, Newton Minow, the nation's new chairman of the federal Communications Commission -- appointed earlier that year by President John F. Kennedy -- gave a speech to the National Association of Broadcasters' convention in which he called commercial television a "vast wasteland."

Though TV still was fairly new back in 1961, that phrase stuck.


"When television is good, nothing — not the theater, not the magazines or newspapers — nothing is better.
"But when television is bad, nothing is worse. I invite each of you to sit down in front of your own television set when your station goes on the air and stay there, for a day, without a book, without a magazine, without a newspaper, without a profit and loss sheet or a rating book to distract you. Keep your eyes glued to that set until the station signs off. I can assure you that what you will observe is a vast wasteland.
at May 09, 2018