A version of this was published in The Santa Fe New Mexican
June 1, 2018 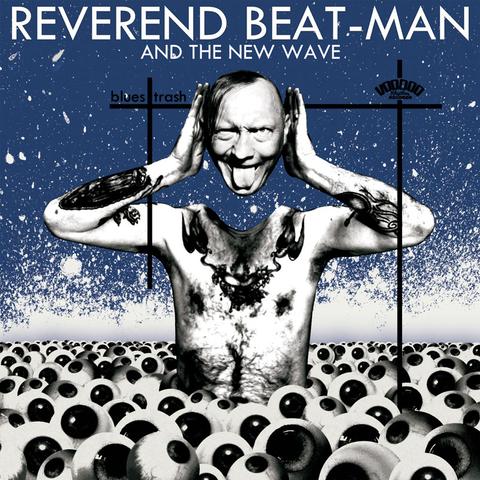 The Swiss singer/songwriter/trash rocker/record-company owner/philosopher/holy man known as Reverend Beat-Man was speaking for himself in an interview more than a decade ago. But he could have been talking for untold numbers of unsung, underpaid heroes of modern music when he said:

“I have to get up in the morning out of the bed, and I have to play guitar. I have to go to the office and put out records that nobody buys. I just have to do it. I don’t know why.”

Obviously Beat Zeller is possessed by a very demanding creative spirit that won’t let him live any other way. His new album, Blues Trash (Voodoo Rhythm Records), is testament to that. The title is similar — probably too similar — to that of the two-volume Surreal Folk Blues Gospel Trash, the good reverend’s solo project from 2007. But the new album is no rehash. Beat-Man’s sound is evolving.

On Blues Trash, he’s backed by a band dubbed the New Wave. Members include Bosnia-born accordion player Mario Batkovic, a couple of Bern homeboys (drummer Julian Sartorius and Resli Burri, who plays several instruments), and Los Angeles native Nicole Izobel Garcia, who in recent months has toured with Beat-Man as a drummer. On the album, she also plays organ and sings.

The first track, “I Have Enough,” sounds like classic Beat-Man. It’s a growling rocker built around a raunchy blues lick, the kind Howlin’ Wolf used to hear in his skull when he closed his eyes at night. This is followed by “I’m Not Gonna Tell You,” a tasty slice of garage-punk that would easily fit in with the crazed repertoire of Beat-Man’s longtime band The Monsters. As usual, Beat-Man’s vocals sound like Popeye auditioning for a German industrial band.

But then things start getting weird on the third track, “Today Is a Beautiful Day.” With a lilting beat, a sinister guitar, and what sounds like a tooting tuba, Beat-Man takes a cue from his pals the Dead Brothers, who have billed themselves as a “funeral orchestra.” (New Waver Burri has played with that band.) The Rev croons:

The same morbidly fatalistic doomsday spirit returns a few tracks later with a song called “Then We All Gonna Die.” Here Beat-Man sings over a harmonium and ominous drums that eventually turn into a troubling rumble:

Even spookier is a stark but alluring love song in Spanish featuring Garcia on lead vocals, with Beat-Man singing a gruff “But I love you” four times at the end of each verse. “But I Love You” has to be the prettiest song to ever appear on a Beat-Man album — or in the entire Voodoo Rhythm catalogue.

Accordion man Batkovic steps out into the spotlight on a couple of tracks. There’s the jaunty Balkan-sounding “I’ll Do It for You,” a dance tune, sung by Beat-Man, that would have fit in the Borat soundtrack.

Then, the final track, “Lass Uns Liebe Machen” (German for “Let’s Make Love”) sounds like a damaged relic from the Weimar Republic. With Beat-Man singing, Batkovic’s accordion is the main instrument, at least until the musical saw (I assume played by Burri) comes in.

But while I appreciate Beat-Man’s multicultural excursions, the best song on Blues Trash is a prime example of, well, blues trash. That’s “The White Wolf Is Back in Town.” It’s a slow-burning howler — literally. Beat-Man howls at the outset of every verse. He plays a steady, repetitive blues lick punctuated by scary sounds from Garcia’s organ and a screaming sax. We never find out who or what the White Wolf is. But I would guess the town has cause to be nervous.

So once again, Beat-Man has followed his compulsions and indulged his obsessions, releasing an album full of wild, unsettling music. And probably, like all its predecessors, not that many people will buy it. But for those of us who have heard the call of the White Wolf, it’s comforting just to know the good Reverend Beat-Man is still in the game. 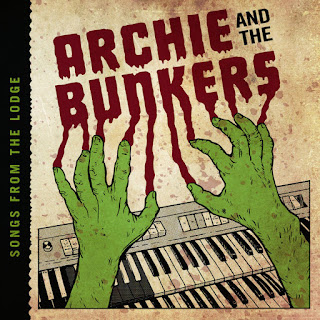 * Songs from the Lodge by Archie & The Bunkers. Sometimes I worry about the youth of the 21st century.

I don’t have any exact statistics, but there are a disturbing number of youngsters who don’t give a rip about rock ’n’ roll.

They’re into hip-hop or techno, and many, we’re told, don’t really give a rodent’s posterior about music in general, and will give you blank stares when you mention Little Richard, Bo Diddley, or The Ramones, assuming all that talk is nothing but geezer babble.

Fortunately, this is not completely true. Despite changing times and priorities, rock ’n’ roll is still a guiding light for millions of young people. And there are even some bands ready to carry the torch.

In fact, one of my favorite groups in recent months is Archie and the Bunkers, a pair of teenage brothers from Cleveland. Drummer Emmett and organ player Cullen O’Connor have a unique high-energy sound they call “hi-fi organ punk.”

Their new album is even more impressive than their debut, Mystery Lover. The opening tune, “Bill’s Bad Day,” sets an urgent tone that never lets up. Other highlights include “You’re My Pacemaker,” the frantic “Lost in Today” and “122 Hours of Fear,” which is a cover of a song by The Screamers, a California “techno-punk” band from the late ’70s.

Plus, The Bunkers give us not one, but two songs about Twin Peaks, “Fire Walk With Me” and “Laura.”

These boys not only have talent, they have taste!

Here's a song from Blues Trash

And here's a live song by Reverend Beat-Man, sung by Nicole Izobel Garcia

And here are couple by Archie & The Bunkers