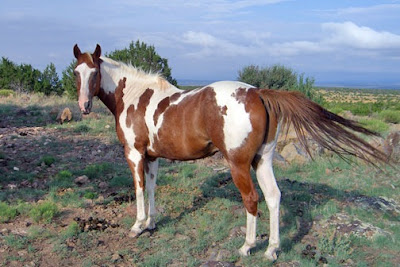 An unnamed cowboy was passing through Santa Fe on his way toward the Mexican border many years ago. Here he met up with a couple of women, both of whom being poets with ears for folk songs. The mysterious stranger gave then a song they wouldn't forget.

It was full of colorful cowboy lingo about throwing the hoolihan, and feeding the coulees, as well as black humor about a guy's wife who was killed "in a poolroom fight" and a cowpoke who asks that when he dies, tie his body to the back of his horse so "we'll ride the prairies /That we love the best ..."

Poet Carl Sandburg learned the song from one of the women, Margaret Larkin, who lived in Las Vegas, N.M. He published it in his American Songbag collection in 1927. There, he wrote of the song:

“This arrangement is from a song made known by Margaret Larkin of Las Vegas, New Mexico, who intones her own poems or sings cowboy and Mexican songs to a skilled guitar strumming, and by Linn Riggs, poet and playwright, of Oklahoma in particular and the Southwest in general. The song came to them at Santa Fe from a buckaroo who was last heard of as heading for the Border with friends in both Tucson and El Paso. The song smells of saddle leather, sketches ponies and landscapes, and varies in theme from a realistic presentation of the drab Bill Jones and his violent wife to an ethereal prayer and a cry of phantom tone. There is rich poetry in the image of the rider so loving a horse he begs when he dies his bones shall be tied to his horse and the two of them sent wandering with their faces turned west.”

Ah! The old mysterious-buckaroo-passing-on-songs-in-Santa-Fe ploy. Happens all the time. That's how I learned the tune "Hang on Sloopy" many years ago ...

But Ken Bigger, writing about the song for the Murder Ballad Monday blog, expresses some skepticism about Larkin's Santa Fe story. "Given the song’s themes and history, I was led to wonder whether Larkin might have written the song herself," he wrote. "I thought perhaps that she hid her authorship in order to avoid compromising the song’s perceived authenticity."

But Bigger admits his suspicion is theory is "purely speculative, and there are compelling arguments against  it. "Hiding her authorship would have involved at least Larkin and probably Sandburg in levels of deception inconsistent with their other work."

More than a decade after publishing American Songbag, Sandburg recorded the song. Here it is:


"Old Paint" became a staple in the Hollywood heyday of the singing cowboy. Roy Rogers & Dale Evans covered it. So did Rex Allen.

And, with help from Woody Guthrie, the song became a favorite of mid-century American folksingers.

Woody took some liberties with the lyrics, adding a verse that goes:

"I’ve worked in your town, I’ve worked on your farm / All I’ve got to show is this muscle in my arm / Blisters on my feet and callous on my hand /Goin’ to Montana to throw the hoolihan."

He also changed details about Old Bill Jones' family, giving him a daughter and a son instead of "two daughters and a song." And though Old Bill's wife still died in a free-for-all fight, Woody doesn't mention that the tragedy occurred in a sleazy old poolroom. ("He preserves her virtue, perhaps, without diminishing the tragedy," Bigger wrote.)

Recently Holly Golightly & The Brokeoffs included a rocking version on their new horse-oriented album Clippety Clop (which you can read about in my next Terrell's Tune-up column.)

But my favorite version remains the first one I heard, the one by Loudon Wainwright III in the early '70s.