TERRELL'S TUNE-UP: The latest from Sarah Shook and Holly Golightly

A version of this was published in The Santa Fe New Mexican
June 22, 2018 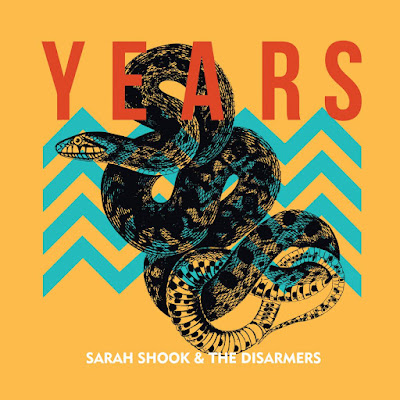 Last year an album called Sidelong by an artist I’d never heard of named Sarah Shook (with her band The Disarmers) instantly became one of my favorite country albums in recent years. The album was already a couple of years old by the time I heard it, originally released back in 2015. Venerated “insurgent country” label Bloodshot Records of Chicago rereleased it last year, so the rest of the world could hear it. The North Carolina native’s unabashed, unaffected hillbilly drawl, her equally authentic defiant attitude, the way her band emulated the '70s “outlaw country” sound while never sounding hokey or retro, and Shook’s good old-fashioned songwriting chops added up to what just might be one important new artist.

So I was somewhat apprehensive a couple of months ago when I got a copy of Shook’s follow up, Years. How could this be as good as Sidelong, coming just a year later? Dare I listen to this when I’m bound to be disappointed?

But such anxiety quickly subsided. Years is no sophomore slump. Though no song on the new one grabbed me quite as hard as Sidelong’s “Keep the Home Fires Burnin’,” there is no shortage of memorable tunes here.

The 10 songs on this album are basically meditations on the end of a troubled relationship. “I'm afraid of losin'/Not afraid of losin' you,” Shook sings in “Good as Gold,” the opening song, So what’s she afraid of losing? “My heart, my pride/A wreck inside/Nothin' on this jukebox 'cept them blues …”

But don’t think the album’s full of confessional self-pity. Shook’s confidence, pride, and humor frequently shine through the heartache. In the next song, “New Ways to Fail,” she sneers, “It seems my way of livin' don't live up to your standards/And if you had your way I'd be some proper kind of lady/Well the door is over there, if I may speak with perfect candor/You're welcome to walk through it at any old time that you fancy.”

And then the wonderfully profane chorus: “'Cause I need this shit like I need another hole in my head.”

Even though on paper it sounds like Shook is pleading for forgiveness — and by the last verse, she’s begging for her lover, who’s locked her out of the house, to let her in — her voice doesn’t sound all that contrite. Damn if I don’t love Sarah Shook. 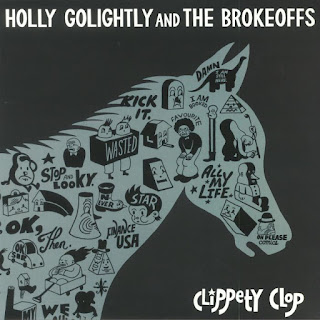 * Clippety Clop by Holly Golightly and The Brokeoffs. For a whole decade now, sweet Holly and her partner known as Lawyer Dave have made wonderful funky country bluesy good-time music together from their farm near Athens, Georgia. But by day, the couple work together in another venture: a horse rescue operation.

The British-born Golightly — a veteran of the all-girl garage group Thee Headcoatees — has been involved with horses all her life, so it’s not really surprising that she’d record a concept album about her beloved beasts. All but four of the dozen songs on the new album are about horses. The other four are about mules.

Among the selections are some classic American songs. After kicking off with a laid-back take on “Mule Skinner” (a Jimmie Rodgers tune usually going by “Mule Skinner Blues”), the couple also put their stamp on the cowboy standard “Strawberry Roan,” “Stewball” (based on the earthy Leadbelly version, not the pretty one by Peter, Paul & Mary) and my favorite, “I Ride an Old Paint.”

Performed by Holly and Dave as an upbeat slop waltz with growling guitar, “Old Paint,” is an authentic cowboy song, published by Carl Sandburg in 1927. Since then, it’s been recorded by various folksingers, country artists, and movie cowboys. I first heard it by Loudon Wainwright III in the early '70s, and I’ve loved it ever since — even though I still don’t know what “throw the houlihan” means.

Other high points here include “Two White Horse,” which is lyrically related to the “One Kind Favor”/“See That My Grave Is Kept Clean” family. If you don’t listen to the words that Holly and Dave sing, you probably wouldn’t realize that this jaunty little number is all about death and funeral rites.

Then there’s “Pinto Pony,” which was penned by an under-recognized songwriter named Paul Siebel, best known for “Louise,” recorded by Jerry Jeff Walker, Leo Kottke, and others. And on “Jinny Mule” Holly gets to show off her affinity for the blues, while Lawyer Dave sounds like he’s murdering both his guitar and his drums.

In truth the whole album is nothing but a joy. I love Holly and The Brokeoffs — and the horses they rode in on.


This is the official video for "The Bottle Never Lets Me Down."

Unfortunately I can't find any videos for any song from Clippety Clop. But here's an old Holly & The Brokeoffs tune: