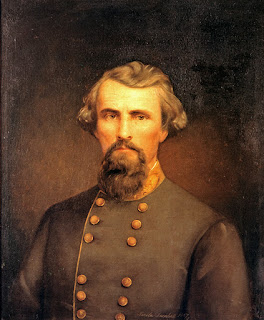 Today is the birthday of the first Grand Wizard of the Ku Klux Klan -- and namesake of Forrest Gump, Nathan Bedford Forrest.

Born in Chapel Hill Tennessee on July 13, 1821, Forrest was a general in the Confederate Army.

Even before his Klan years, Forrest was not a nice guy. Rebel soldiers under his command committed what came to be known as one of the worst atrocities of the Civil War, the Fort Pillow Massacre.

There, in 1864, Forrest's troops slaughtered nearly 300 Union soldiers who had surrendered after the battle of Fort Pillow. Most of those were African Americans.

So let's give the evil old bastard and his twisted, hateful legacy  a one-fingered musical birthday salute.

This ditty by singer Billy Frisch was recorded in 1922. It's called "Ku Ku, (The Klucking of the Ku Klux Klan)."

In the late 1970s, the reggae band Steel Pulse had some thoughts about the group Forrest led.


The most memorable scene from one of my favorite movies O Brother Where Art Thou (2000) was a Klan rally. In the same way that David Lynch's Blue Velvet forever changed the way we hear Roy Orbison's "In Dreams," this scene added terrifying new dimensions to the old folk song "O Death," sung by bluegrass great Ralph Stanley in O Brother. (Actor Wayne Duval, who portrayed the Imperial Wizard, lip-synched Stanley's song.)


And of course, The Ramones.