A version of this was published in The Santa Fe New Mexican
August 24, 2018 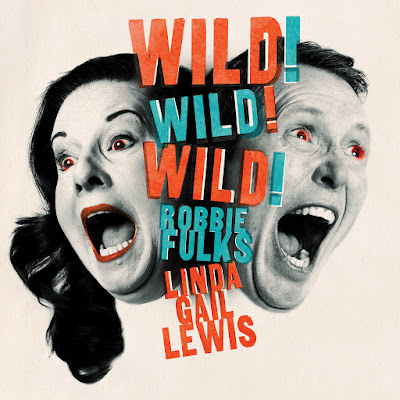 In his previous two albums, Upland Stories (2016) and Gone Away Backwards (2013), Robbie Fulks made the greatest music of his impressive career. Both featured fairly subdued and mostly acoustic songs. But they are powerful songs that cut deep, covering themes of displacement, disappointment, economic and emotional despair, cruel fates, and tangible frustration. Considering that Fulks began his recording career in the 1990s with a string of irreverent, comic tunes such as “Papa Was a Steel-Headed Man,” “She Took a Lot of Pills (And Died),” “I Told Her Lies,” and “Darn This Town” (title bowdlerized for your protection), his albums of the 2010s have shown growth, maturity, and emotional depth.

But sometimes a guy just needs to take a break from the heaviness and tear up the honky tonk with a boogie-woogie country gal. And that’s just what he does on Wild! Wild! Wild!, Fulks’ new duet album with rockabilly royal Linda Gail Lewis. The songs here are much lighter than Fulks’ last couple of efforts. But Lordy, this album is fun. It’s full of rockabilly romps, country weepers, blue-eyed soul, bouncy blues, sweet harmonies, drinkin’ songs, cheatin’ songs ... the sounds that made America a beacon of the Free World.

As a teenager, she began touring and occasionally recording with Jerry Lee in the early ’60s, releasing her first solo album, Two Sides of Linda Gail Lewis, in 1969, the same year she released a duet album called Together with her brother.

After a “nervous breakdown,” the rockabilly wildcat quit showbiz for a decade or so, but returned to performing in the late ’80s and to recording in the early ’90s. And she’s cranked out a steady stream of records since — mainly on small labels and European labels. Her best-known album has to be You Win Again, her 2000 duet record with Van Morrison.

A couple of years ago, on an album called Heartbreak Highway, she teamed up with Fulks on a couple of tracks, including a rocking version of “You Are My Sunshine.” Apparently that led to Wild! Wild! Wild!, on Bloodshot Records.

The album starts off with a solo vocal by Linda Gail on “Round Too Long.” The song sounds autobiographical — though it actually was written by Fulks. It begins with a knowing nod to her family heritage: “I’m the sister of a hell-raiser, the daughter of an old tomcat/I was playin’ the piano in a honky-tonk before you bragged about that.” Later she sings, “Won’t you put me in Kentucky when my time on earth has ceased/’Cause out of all the men who hurt me, Jack Daniels hurt me least.”

Similarly, the next tune, “I Just Lived a Country Song,” sung by Fulks, is about “this honky tonkin’ way of living” taking its toll on a hillbilly singer who knows no other world. Robbie sings, “These beer joints where I’m workin’, I started workin’ at sixteen/Now if I look a little ragged, must be those 30 years between … My first single hit the big-time, for a while there I was hot/I can’t recall the early nineties; these last 10 I’d rather not ...”

If “Round Too Long” is Linda Gail’s spotlight and “I Just Lived a Country Song” is Robbie’s, the following song, “That’s Why They Call It Temptation,” a full-blown hillbilly heartbreaker, is the first one that gives the two singers equal footing. They trade off lines and then harmonize on the choruses. My favorite exchange is when Fulks sings, “I tried to keep my hands from where they longed to go,” which Lewis answers with, “And I did all I could to help you, short of sayin’ no.”

Fulks’ sardonic sense of humor comes across in the song “Till Death,” about a woman dealing with a cheating husband. In a weird way, it reminds me of an old song of his, “I Just Want to Meet the Man,” which was about a guy stalking his ex-wife and her new lover. The implied impending violence of that song (“No that’s nothing in my pocket, just a toy I brought for Jane/I couldn’t bear to see her hurting/Now Daddy’s here to kill the pain ...”) actually plays out in the upbeat “Till Death.” Linda Gail sings, “You’re a man that can’t keep a promise/I’m a woman never breaks a vow/We said ‘Till death do us part,’/And that’s now.” You should get a bang out of this number.

Another favorite on Wild! Wild! Wild! is “Who Cares,” a jazzy little tune sung by Lewis and written by country songwriter giant Don Gibson, whose greatest hit was “Oh Lonesome Me.” Besides Linda Gail’s vocals, the best thing the song has going for it is the sweet guitar of Redd Volkaert, who cut his proverbial teeth as one of Merle Haggard’s Strangers.

Then there’s “Foolmaker,” sung by Fulks, which drips with gospel-soaked Southern soul. Out front is NRBQ member Scott Ligon on organ.

This album is probably just a one-shot deal. But I believe that in this collaboration, Linda Gail Lewis brought out the best in Robbie Fulks. And vice versa. Long may they hear the call of the wild, wild, wild.

Here's a live version of the title song

I believe Linda Gail hasn't been around nearly long enough.