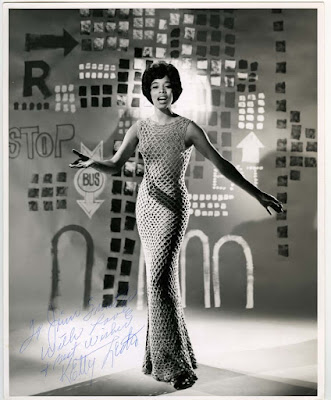 I was just a kid -- third grade I think -- just discovering the joys of early '60s AM radio when my young soul was captivated by a husky voice singing over a haunting piano.

"Love letters straight from your heart / Keep us so near when we're apart ..."

It was a singer named Ketty (for years I thought it was "Kitty") Lester and the song, definitely her greatest hit, was "Love Letters."

Born Revoyda Frierson in Hope, Arkansas (take note Bill Clinton fans) on this day in 1934, Lester began recording in the late 1950s. In 1962 she released a single "I'm a Fool to Want You." However DJs preferred the flip side, which, you guessed it, came straight from Ketty's heart.

And they were right.

"Love Letters" was written in the 1940s by Edward Heyman and music by Victor Young. An instrumental version appeared in a 1945 movie called Love Letters and was nominated for a best-song Oscar. A rather schmaltzy version of the song, with lyrics, was recorded by a singer named Dick Haymes in 1945.  Here's what it sounded like:

Tony Bennett recorded the song, with a jazzy guitar, in 1955

Fast forward to this century for my second-favorite version of "Love Letters" by Tom Jones, backed by guitarist Jeff Beck. I'm not sure who's on piano. This is from a 2003 PBS documentary series,
Martin Scorsese Presents the Blues: Red, White & Blues.

Going back to the early 1970s, John Lennon paid tribute to Lester by capturing the piano part from "Love Letters" on his song "God."

And in the '80s David Lynch via Dennis Hopper, paid tribute -- in his own peculiar way -- in Blue Velvet. "Don't be a good neighbor to her. I'll send you a love letter, straight from my heart, fucker ..."