A version of this was published in The Santa Fe New Mexican
Sept. ,28 2018

One of the sturdiest genres of cinema is the biopic — and a lucrative subgenre of the biopic in the last several decades has been the movie about celebrated popular musicians.

One thing all those films have in common (not counting the fact that most of them had tragic endings) was that every subject was famous in their respective fields, and well-known hit-makers of their times.

That’s not the case with singer-songwriter Michael David Fuller, aka Blaze Foley. But Foley, who died virtually penniless nearly 30 years ago, now has his own biopic. Blaze stars Ben Dickey, an actor who, at least up to now, probably is even less famous than Foley — though hopefully his future is brighter. The film opens in Santa Fe on Friday, Sept. 28.

Foley turned out to be a respected songwriter, though much of that respect came years after his death. Like so many rough-hewn geniuses, his life was a mess.

A self-destructive alcoholic, he was essentially homeless during the last months of his life, sleeping under pool tables at bars. He’d patched up old shoes — and basically everything else — with duct tape.

He was shot and killed in a drunken argument in Austin, in 1989, just a few months after his 39th birthday.

Actor-director Ethan Hawke was familiar with Foley’s story. Hawke — who starred in a 2015 biopic about jazz trumpeter Chet Baker — set out to make a film about a musician who never achieved actual fame but was true to his art, though enslaved by his demons.

Instead of thrilling scenes in which the hero fights his way through the star-making machinery, plays that big important concert, or makes that big important record and conquers the world, this movie shows the bumbling Foley screwing up every opportunity ever presented to him.

He unwittingly pushed away the one woman he really loved and hurtled toward his senseless and violent fate. There is no big important concert here — much of the film shows Foley playing somberly at an Austin dive called The Outhouse. He played there the night he was killed, capturing 24 songs in a two-hour gig before a small audience that didn’t seem to care.

No, Foley didn’t set the music industry ablaze. His biggest impact on the business side of music was bankrupting a small record company that gambled on him. One of the movie’s funniest scenes, in a dark sense, was when the three former Texas oilfield roughnecks in charge of Zephyr Records — played by Sam Rockwell, Richard Linklater, and Steve Zahn — confront a drunken Foley over his role in the company’s demise.

While Foley remains unknown to most of civilization, he caught the eyes and ears of many major players in country, alternative-country, and folk circles.

Lucinda Williams eulogized him in her song “Drunken Angel,” as Townes Van Zandt — Foley’s most famous crony — did in “Blaze’s Blues.” John Prine recorded Foley’s song “Clay Pigeons” for his 2005 album Fair & Square. Lyle Lovett sang a Blaze tune called “Election Day.” Willie Nelson and Merle Haggard recorded a 1987 duet of Foley’s greatest song “If I Could Only Fly.” And then Hag re-recorded an even more heart-wrenching cover of that song, making it the title track of his excellent 2000 comeback album.

Much of the story in Blaze is based on Living in the Woods in a Tree, the memoir of Foley’s girlfriend and muse for many of his greatest songs, Sybil Rosen (who is portrayed in the film by Alia Shawkat, best known for her role as Maeby in the TV comedy Arrested Development). Rosen (who has a cameo as her own mother in the movie) co-wrote the screenplay with Hawke.

The movie is framed by a recurring radio interview featuring an unnamed radio host played by Hawke (we only see the back of his head during these scenes) and Van Zandt, who is impressively played by Austin guitar picker Charlie Sexton.

The interviewer isn’t hip to Foley — he calls him “Blaze Folly.” Sexton’s Van Zandt corrects him and fills him in on the life of his friend — some of which, like his infamous twisted tall tale about digging up Foley’s grave to get a pawn ticket out of the dead man’s jacket — are likely more fiction than fact. But I bet Blaze would have gotten a kick out of most of the stories.

Dickey is the real star of the show. He captures Foley’s lumbering presence, his menacing scowl, his mumble, and his vulnerability underneath a thick beard and oversized cowboy hat.

And he even sounds a lot like Foley when he sings. There is an album to go along with the movie, Blaze (Original Cast Recording), featuring Dickey’s versions of Foley tunes. It’s decent, but I suggest that before you buy that, seek out Foley’s original material. Though — as the film makes clear — Foley was a flawed human, his soulful music deserves wider recognition. ◀

This is the official trailer for Blaze.

Here's one of my favorite Blaze tunes

Another Foley classic. John Prine thought so too. 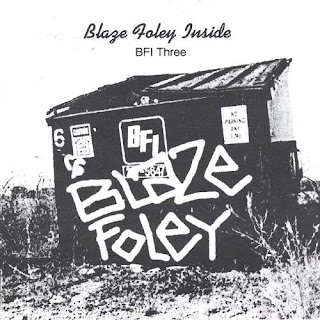