The last time I saw Peter Case was in the summer of 2010 at one of Russ Gordon’s free shows at the Pajarito Mountain Ski Area. Case was touring for his album Wig, a punchy, bare-boned, blues-infused record that rocked harder than anything he’d done since his tenure with The Plimsouls in the early ’80s. (And, as far as I’m concerned, it’s still one of my favorite Case solo albums.) At the Los Alamos concert, he was backed only by longtime Santa Fe drummer Baird Banner. It was a terrific show, probably the best live Case set I’ve ever witnessed. Eight years later, I’m still jabbering on about it.

But maybe after next week, I’ll have something else to jabber about. Case is playing a show at Gig Performance Space (1808 Second St.), on Sunday, Nov. 11. (He’s also playing tonight,  Friday, Nov. 9 at The Cooperage in Albuquerque.)

So who is this guy?

Born in Buffalo, New York, in 1954, Case grew up in a nearby small town called Hamburg. Inspired by the record collections of his older sisters, he found himself playing in local rock ’n’ roll bands. His love for folk music took a quantum leap after he found a Mississippi John Hurt record in his local library. Soon he was playing in coffeehouses and on the streets of Buffalo.

By the mid-’70s, he was busking on the streets of the North Beach district of San Francisco. “That period was really the last explosion of the 1960s,” he told me in an interview in 2000. “It was great. Allen Ginsberg might walk up while you’re playing and start making up new verses.”

It was there where Case met songwriter Jack Lee. Leaving the folk scene, the two started the Nerves, one of the first California punk bands. When they split up, Case formed The Plimsouls, a roots-conscious power pop band.

Although The Plimsouls achieved national acclaim — Case’s “A Million Miles Away” became an early-’80s rock classic — Case just wasn’t satisfied. And one night in 1983, on a stage in Lubbock, it hit Case. “I longed to do the type of music I used to do,” he said. Soon after, The Plimsouls broke up and Case, at least in a metaphorical sense, was on his way back to the street corner.

Case’s self-titled 1986 solo debut album and, even more so, its successor, The Man with the Blue Postmodern Fragmented Neo-Traditionalist Guitar, were so raw, so connected to musical, literary, and cultural undercurrents that had been repressed during the first half of the ’80s, they were downright jarring.

By the mid-’90s, Case was taking a dive into the deep end of folk music, signing to the venerated folkie label, Vanguard Records, which released Peter Case Sings Like Hell in 1993. It consisted of traditional roots songs on which he cut his proverbial teeth. Then came a string of strong records.

Case’s latest, On the Way Downtown, consists of live radio performances on FolkScene, a syndicated radio show from KPFK in Los Angeles. He played two performances there during his Vanguard years — one in 1998, the other in 2000.

The album features many of his best songs, including “Blue Distance,” “Icewater,” “Honey Child,” “Beyond the Blues,” “Still Playin’,” and the quirky “Coulda Shoulda Woulda,” which contains the immortal lyrics, “Coulda shoulda woulda stayed in school/James Brown was right/I was a fool.” 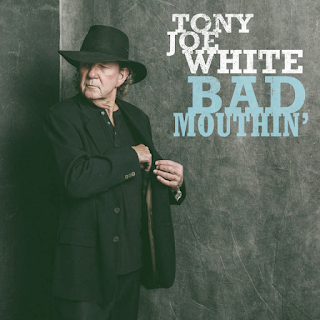 * Bad Mouthin’ by Tony Joe White. I never got to meet Tony Joe White. But just from his deep drawl, his music straight out of the swamp, the hat, the sunglasses — I naturally assumed that the man who brought us “Polk Salad Annie” was the coolest guy alive.

And I still believe that, except for the “alive” part. American music lost a giant on Oct. 24, the day that Tony Joe died at the age of seventy-five. If Tony Joe’s death wasn’t sad enough, the swamp reaper came for him just after he’d released what would be his final album.

Bad Mouthin’ is a collection of Tony Joe literally singing the blues — blues filtered through White’s Louisiana soul and backed only by a drummer and White’s guitar.

There are several standards here that any casual fan of the blues should recognize, including Jimmy Reed’s “Big Boss Man,” Muddy Waters’ “Baby Please Don’t Go,” and John Lee Hooker’s “Boom Boom” and “Heartbreak Hotel” — made famous by a man called Elvis, who did probably the second-greatest version of “Polk Salad Annie.”

And there are more obscure songs, like Charley Patton’s “Down the Dirt Road Blues” and several Tony Joe originals, including the title tune, “Cool Town Woman,” in which you can hear Hooker’s influence. “I dreamed about you baby and the dog just howled all night” may be the best line in the whole album.

But at the moment, my favorite track here is the longest: A six-minute-plus version of Lightnin’ Hopkins’ “Awful Dreams.” Like Hopkins, Tony Joe does “Awful Dreams” low and slow. But long as it is, the song never drags. “I don’t know if I’m goin’ to heaven or hell,” he moans near the end of the song.

I don’t know, but it seems to me any heaven without Tony Joe White wouldn’t be heaven at all.

Here's Peter Case singing one of my favorites, "Entella Hotel"

Here's a rocker, "New Old Blue Car." (Warning: long introduction. You can skip ahead to about the 1:15 mark)

And here is Tony Joe live ... about a month before he died