THROWBACK THURSDAY: Merle Travis Brought Light Into the Coal Mine 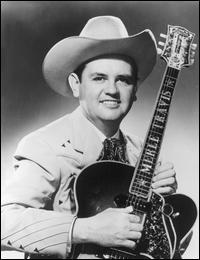 Today would have been the 101st birthday of one of country music's greatest guitar pickers, singer and songwriters of his generation -- and, in my book, any generation -- Merle Travis.

Born in Rosewood, Kentucky (that's Muhlenberg County, John Prine fans) in 1917, He performed the song "Tiger Rag" on an Indiana radio show when he was 18 and soon began playing professionally. And he kept at it until his death in 1983.

In 1946 he recorded a "folk" album for Capitol records, Folk Songs of the Hills. But Travis himself wrote several of the "folk songs" here, including several of the songs for which he's best known. One of them, "Sixteen Tons" would become a huge crossover hit for Tennessee Ernie Ford nearly a decade later.

Here's a version by Merle.

Travis on TV in the mid '60s doing a hillbilly gospel blues tune.

And here he is in the '70s showing off his fancy picking. (Sorry, I'm not sure who the other folks are.)

Check out more coal-mining songs, including different versions of "Sixteen Tons" and "Dark as a Dungeon," HERE
at November 29, 2018