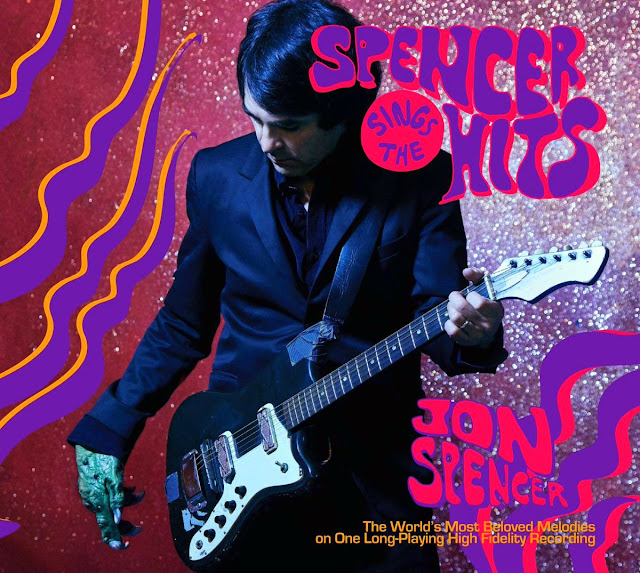 Jon Spencer has been on a roll the past six years or so. After an eight-year hiatus, in 2012 the Jon Spencer Blues Explosion crashed back onto the stage with Meat + Bone, an exuberant blast of twisted blues- and soul-tinged raw and crazy clunk-punk, which was their best work since the mid-’90s. That was followed in 2015 by another mighty album called Freedom Tower - No Wave Dance Party 2015. Last year, one of Spencer’s other bands, Boss Hog, released a cool album, Brood X, but Spencer’s wife Cristina Martinez is the real star of that group.

And now, Spencer is back, this time with a solo album called Spencer Sings the Hits! Don’t let the “solo album” thing scare you away. Spencer ain’t singing sensitive, introspective acoustic songs or recording with the London Philharmonic or stinking up the place with usual-suspect guest vocalists. And despite the title, none of the dozen songs here have ever been hits for Spencer or anyone else.

No, this is just Jon Spencer as we love him. As a matter of fact, had I not already known it was a solo album, you could have fooled me into thinking it was a new one by the Blues Explosion. However, for reasons I don’t know, Explosion members Judah Bauer (guitar) and Russell Simins (drums) are absent here. They’re replaced by keyboardist Sam Coomes (from Quasi) and drummer M. Sord, with Spencer’s guitar and shouted vocals as crazed as ever.

From the opening drumbeats of “Trash Can” — soon joined by Spencer singing, “Do the Wobble, Do the Wiggle … Kick that can/Do the Trash Can ...”— through the last song, “Cape” (which has a similar guitar hook as The Cramps’ version of Charlie Feathers’ “Can’t Hardly Stand It”), Spencer fans will immediately know that they’ve come to the right party.

Among the highlights are “Love Handle,” slower than most of the tunes here, in which the guitar licks of the verses have echoes of Memphis soul. “Time 2 Be Bad” features keyboards that sound like Devo on a skid-row bender, and “I Got the Hits,” the closest thing to a title song here, is a tongue-in-cheek brag: “I got the hits ... I got corruption, malice, I got deceit, I got lies, I got it all baby, and it’s all for you ...”

But it ain’t all fun and games. While Spencer usually sounds as if he’s bemused by the world, in a couple of songs he sounds downright angry. I don’t know the “counterfeit punk” Spencer is eviscerating in the song “Fake” (“Your ideas are wrong/You’re lukewarm/Washed-up and bland …”) but I’m glad it’s not me.

Maybe it’s the same target he unloads on in “Beetle Boots.” He starts that song growling about some poser in “imitation leather and plastic zipper.” Then later in the song, Spencer seems like he’s taking personal offense at this jerk. “You think it’s easy being in a band?/Wrong priorities/Misguided intentions/Ironic distance just reinforces convention ...”

It’s a cruel world, and the plastic-zipper phonies are way more likely than Spencer to get the hits. But as long as he keeps raging and playing his goofball Frankenstein blues, Spencer’s call of the wild will continue to resonate with those of us who love to wobble and wiggle. 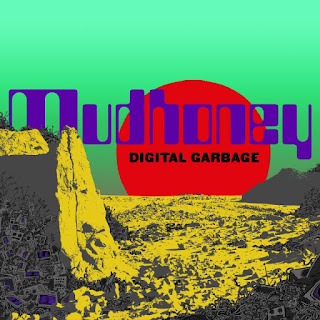 * Digital Garbage by Mudhoney. Speaking of angry lyrics, this album is basically Mudhoney’s state of the union address, and they aren’t very happy about what’s going on here during the Trump era.

Among the topics of disgust on this album by these Seattle grunge survivors are white supremacists (“Listen to the footsteps/Echoing in the streets/Here come the footsteps/Echoing in the hall/These are the footsteps/That echo through history,” Mark Arm sings in “Night and Fog”); conspiracy loons (“Vaccines, chemtrails, false flag plots/Government camps, Sharia law,” from “Paranoid Core”); mass shooters (“We’d rather die in church,” the narrator of “Please Mr. Gunman” pleads); and the religious right. Lordy, how Mudhoney loathes the religious right. “21st Century Pharisees” lambastes evangelicals’ loyalty to the current chief executive. “He doesn’t give a fuck about your Jesus,” Arm wails.

Topical songs might be a turn-off to a lot of rockers. But don’t worry. This ain’t Joan Baez. Mudhoney rocks just as ferociously as they did when they unleashed the song “Touch Me, I’m Sick” back in the late ’80s. With his garage-psychedelic licks, guitarist Steve Turner is every bit the monster he was in the early days. So if it’s politics that’s getting them charged up these days, then so be it. 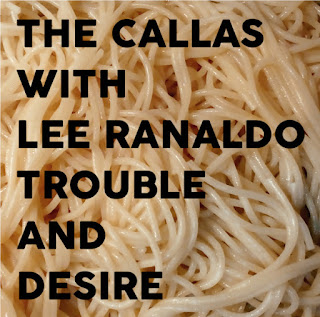 * Trouble and Desire by The Callas, with Lee Ranaldo. A former guitarist with Sonic Youth,
Ranaldo is more than sixty years old, but on this record he shows he’s still got some “Teenage Riot” in him.

I admit that I was a little apprehensive when I heard he was teaming up with a Greek art-rock band I’d never heard of. After all, as much as I loved most of Sonic Youth’s impressive three-decade catalog, I tended to avoid most of their forays into artsiness — and much of the post-breakup output of Sonic Youth members falls into that category.

You can hear echoes of the Sonic Youth spirit in “The Magic Fruit of Strangeness,” the first real song on the album. It’s a hard-driving, minor-key rocker with a little bolero in its urgent rhythm. “Μελανιά” (which in English means “bruise”) reminds me a lot of the bass-heavy verses in Nirvana’s version of “Love Buzz.”

Meanwhile, the pounding “Acid Books,” featuring the women of The Callas providing shout-along vocals in the choruses, is some of the wildest rock ’n’ roll you’ll hear all year. I don’t know what they’re shouting, but I’m not about to argue about it.

Here are songs from each of these albums. First Spencer:


Now, The Callas with Ranaldo