TERRELL'S TUNE-UP: Something to Bother or Perhaps Even Frighten Everyone. 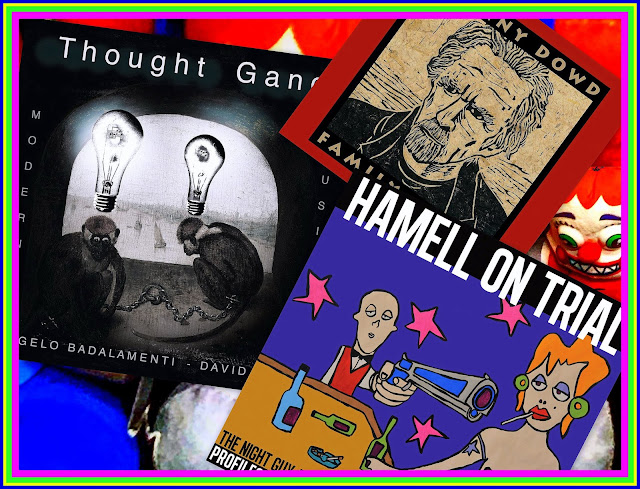 Here are three new albums that on the surface don’t really sound much like one another. But you can classify all as “uneasy listening” — music with something to bother or perhaps even frighten everyone. 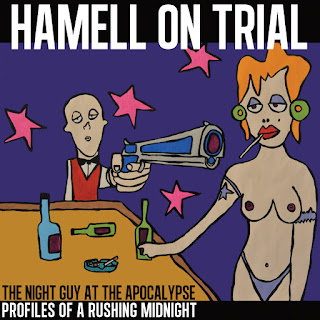 * The Night Guy at the Apocalypse Profiles of a Rushing Midnight by Hamell on Trial. This basically is a song cycle by singer/songwriter Ed Hamell centered around a fictional hardcore dive called The Apocalypse, which is populated by drunks, drug addicts, backdoor beauties, angel-headed hipsters, small-time criminals, and tough guys.

Yes, other artists have covered similar ground, the most obvious being Tom Waits. But a major difference between Waits and Hamell is that none of Hamell’s hookers have hearts of gold. And all of his Romeos are bleeding.

One of the key themes running through Night Guy is vigilante justice. The denizens of the Apocalypse might be powerless in the traditional sense, but they’re perfectly capable of taking care of the occasional Nazi, child molester, wife beater, crooked politician, or other evil creep who makes the mistake of walking into the bar.

“Aggie and the D.A.” is about an elaborate plot to use a comely floozy to set up a drunken prosecutor who happens to be a pedophile. Of course, sometimes the vigilantism goes too far, like the arrogant lawyer (or was he a CEO? A politician?) who takes a brick to the head, fatally, in the opening song, “Slap.” Sings Hamell: “He didn’t do anything overtly bad/’twas just that fucking smirk he had ...”

This album is a lo-fi affair recorded in its entirety on Hamell’s iPhone in various locales. Some are recorded at Hamell shows with audiences singing along, others away from the stage — from inside his car in a Detroit parking lot to an airport restroom in Iceland.

Not for audiophiles, but I suspect the regulars at the Apocalypse don’t love audiophiles any more than they love corrupt politicians. 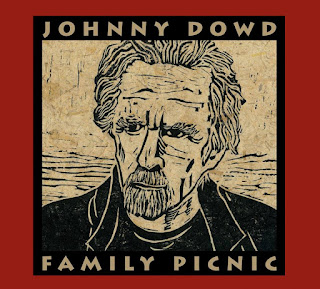 * Family Picnic by Johnny Dowd. Here’s another artist who embraces losers, down-and-outers, and pictures from life’s other side.

On his latest (soon-to-be-released) album, Dowd embraces his musical past. His last few records have found the moving company owner drifting into minimalist, sometimes menacing electronic weirdness as a backdrop to his Texas drawl. But Family Picnic is closer in sound to his classic turn-of-the-century output.

And more good news: Singer Kim Sherwood-Caso, who graced most of Dowd’s works until the dawn of this decade, is back. And she’s still delightful.

There are nods to the blues here — albeit the blues through a crazy Dowd filter. There’s the harmonica-driven shuffle of “Vicksburg,” in which the music suggests good times as Dowd sings about the carnage of the Civil War.

Likewise, the song “Conway Twitty” is a distorted blues tune about a rube soaking in the bright lights of New York City, dreaming of being a star “like Conway Twitty.”

Longtime Dowd fanatics will recognize “Dream On” as a version of a song that originally appeared on Chainsaw of Life by Hellwood — a short-lived band Dowd had with singer Jim White circa 2006. In the song, Dowd confesses a fear of burning out. “You called me a dreamer, but I’m all dreamed out/I’m just a whisper/I don’t know what I was shouting all about,” he sings.

“Thomas Dorsey,” the last song on Family Picnic — and another one from the Hellwood project — is a tribute to the greatest songwriter in the history of gospel music. While the Hellwood version is dark and minor-key, here Dowd turns it into what on the outside sounds like a happy cowboy song — though the fadeout, where Johnny and Kim repeat the refrain, “I wish that Satan would let me go,” is jarring in this context. 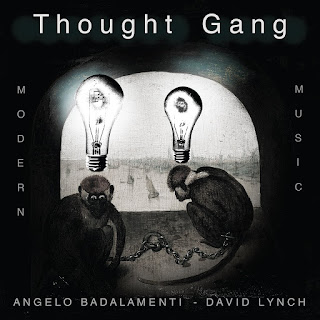 It was recorded in the early 1990s, somewhere around the time Lynch had finished his film Wild at Heart and the original Twin Peaks TV series and was working on the movie Twin Peaks: Fire Walk With Me. In fact, a couple of the tracks here — “A Real Indication” and “The Black Dog Runs at Night” — appeared in that latter film and its soundtrack album.

Reportedly, a few stray Thought Gang snippets have been used in subsequent Lynch works. But the lion’s share of this music has sat in the proverbial vault — or maybe some nameless necromancer’s crypt — for nearly 30 years.

Badalamenti, who has worked with Lynch since the mid-’80s, has already proven himself a master in musically capturing and enhancing the strange moods and disturbing undercurrents of Lynch’s unique storytelling.

Sometimes it was lush strings, as heard on “Love Theme From Twin Peaks,” or the heartbreaking dream pop of Julee Cruise on “Mysteries of Love” (from Blue Velvet), or slinky jazz, like Twin Peaks’ “Dance of the Dream Man.”

But the music of Thought Gang is even crazier.

According to a recent Lynch interview in The Guardian, the director would tell the musicians to create soundscapes for strange scenarios, such as one featured on this record for the 16-minute epic “Frank 2000”:

“OK, there’s a bar downtown, not a great bar, and it’s 2:30 or 3 a.m., and there’s a lot of drunk and strung-out people coming out. There’s a shootout and there’s all this running and fear and guns going off. And these pick-up trucks start showing up because there’s a plan to take some of these people out to the desert.”

Sounds like Lynch may have had a couple of cocktails at the Apocalypse Lounge.

First some Hamell on Trial

Remember kids, stay away from gangs and drugs!