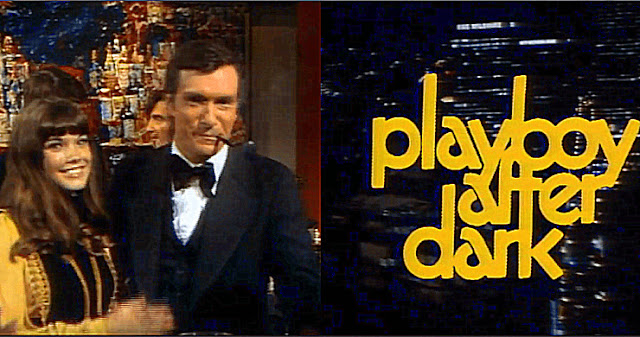 Back in 1969, Hugh Hefner was not yet a dirty old man. He was a dirty middle-aged man.

But while the pipe-smoking, tuxedo-wearing head of the Playboy empire didn't seem at place in the wild and woolly rock 'n' roll world of the day, Heff was responsible for one of the one of the best television platforms for rock 'n' roll during the brief (1969-70) run of his syndicated TV show,  Playboy After Dark.

Sure, the show featured appearances by Sammy Davis, Jr. and various lounge lizards like Jack Jones, Buddy Greco and Gloria Loring `- singers who weren't even invited to Woodstock. But it also featured a lot of truly hip acts of the day who you rarely, if ever saw anywhere else on TV back then.

Plus, it was kind of fun seeing the likes of Doug Sahm, Roger McGuinn, James Brown and other counter culture greats schmoozing with Heff, Barbie Benton, various bunnies and other Playboy types.

Here are some of those performances.

Let's start with the mighty Steppenwolf

The Byrds, during their Sweetheart of the Rodeo era (sorry, it's post-Gram Parsons)

And here's The Sir Douglas Quintet

More Playboy After Dark clips (plus some from Heff's earlier TV foray, Playboy's Penthouse)  can be found HERE
at January 17, 2019