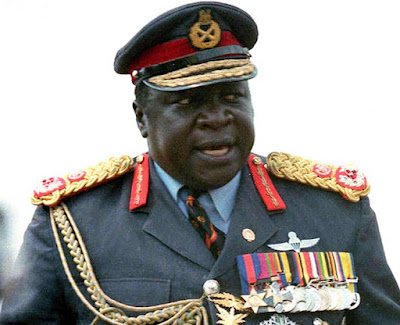 Forty years ago today, His Excellency, President for Life, Field Marshal Al Hadji Doctor Idi Amin Dada, VC, DSO, MC, Lord of All the Beasts of the Earth and Fishes of the Seas and Conqueror of the British Empire in Africa in General and Uganda in Particular -- aka, the uncrowned king of Scotland -- was forced to flee from his native Uganda and give up the power he enjoyed and abused for nearly a decade.

Encyclopedia Britannica said of Amin, "He was noted for his abrupt changes of mood, from buffoonery to shrewdness, from gentleness to tyranny. He was often extreme in his nationalism."

Encyclopedia Britannica also says, "Amin came to be known as the “Butcher of Uganda” for his brutality, and it is believed that some 300,000 people were killed and countless others tortured during his presidency."

By late 1978, the Lord of All the Beasts of the Earth and Fishes of the Seas etc. had made the stupid mistake of invading neighboring Tanzania. That country launched a counter attack that eventually drove him out of the country. Amin escaped first to Libya, then eventually he settled in Saudi Arabia.

At least he left behind some fine songs in his "honor."

This one is from a 1975 British comedy album called The Collected Broadcasts of Idi Amin. Comedian John Bird is on vocals


Here's a Spanish band called Mortimer who recorded this in the mid '70s.


The late Texas singer-songwriter Blaze Foley had opinions about Amin as well. He expressed them in his song "Springtime in Uganda."


Then there's this one, featuring Chuck E. Weiss and his pal Tom Waits 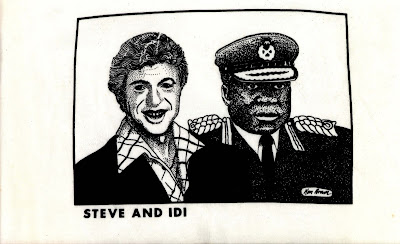