A version of this was published in The Santa Fe New Mexican
May 24, 2018

Here’s some recent hip, mod rock ’n’ roll the kids are going ape and blowing their tops over.

Or maybe not the kids. But I am. 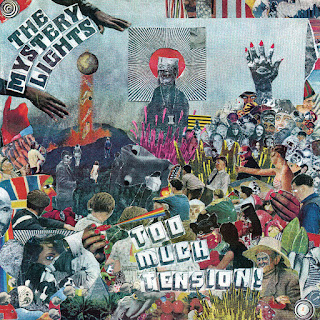 * Too Much Tension! by The Mystery Lights. It’s been nearly three years since I discovered this band. For a while there I started to think the self-titled album of this wailing, psychedelia-touched, garage-fueled outfit — the first release on the influential independent soul label Daptone subsidiary, Wick Records — perhaps could be their swan song.

Fortunately, I was wrong. This new high-energy record is just as good, if not better, than the previous album. In other words, it’s a real humdinger (and I like ’em like that).

For those who haven’t seen the light of The Mystery Lights, singer Mike Brandon and guitarist Luis Alfonso Solano started playing together as teenagers in Salinas, California. These were kids who were hip enough to love the old Nuggets compilations — which consisted of first-wave garage-rock madness — as well as bands like The Velvet Underground and Suicide.

Somehow Brandon and Solano ended up in Brooklyn, where apparently they crossed paths with Daptone, which helped them win a wider — if not yet gigantic — audience.

There are many notable songs on Tension. After a 46-second spook-house intro by keyboardist Lily Rogers (titled “Synthtro”), the whole band comes in with “I’m So Tired (of Living in the City),” which seems to have sprung from the guitar riff of “I Wanna Be Your Dog” by The Stooges. “Wish That She’d Come Back” is informed by both Del Shannon and Screamin’ Jay Hawkins. And I hear distant echoes of The Talking Heads in “Someone Else Is in Control.” Meanwhile, the slow, soulful minor-key track “Watching the News Gives Me the Blues” could be something the late Daptone star Charles Bradley might have taken a crack at.

I strongly advise: Go toward the Lights. 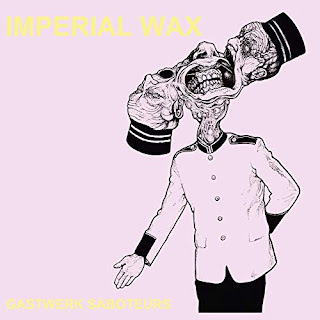 After Mark E. Smith — founder, frontman, and frothing prophet of The Fall — died last year, surviving members of his band also decided to go on. I should clarify that guitarist Pete Greenway, bassist Dave Spurr, and drummer Keiron Melling, while they backed Smith for The Fall’s final decade, are far from the only surviving members of that band, which first reared its ugly head in the late ’70s and reportedly has nearly 70 former members, including a couple of Smith’s ex-wives.

But unlike Morrison’s old band, these guys wisely decided not to keep the old band name. They named the group Imperial Wax, a nod to the first 2008 album on which they backed Smith, Imperial Wax Solvent. And they hired a new singer, Sam Curran, who can get manic like Smith, but otherwise doesn’t sound much like him.

I was prepared to be cynical about Gastwerk Saboteurs, the group’s first album, but I was pleasantly surprised. In fact, I’m pretty sure that if someone had played me these songs without mentioning anything about The Fall, I would have liked them anyway — and not even thought about Smith. It’s just good, aggressive, guitar-driven, punk-painted rock.

Standouts here include “Turncoat,” which sounds a little like Frank Zappa’s “Trouble Every Day,” except with nastier guitars; “Plant the Seed,” which has more than a little “Radar Love” in it; and “Rammy Taxi Illuminati,” which is nearly 10 minutes long but doesn’t get old.

I somehow don’t think Imperial Wax will ever become as influential and important as the band that spawned them. But they sound like they’re having a great time trying. 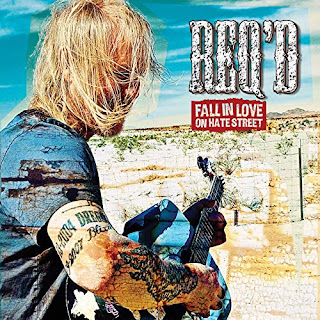 * Fall in Love on Hate Street by REQ’D (Wondertaker). This basically is a solo record by Sluggo Cawley, best known as the guitarist of the outrageous Bay Area punk band The Grannies. The two times I’ve seen that group, Sluggo was never singing. Both times his mouth was hidden by a gruesome-looking monster mask of some sort. (The Grannies are known for their colorful and hilarious costumes, wigs, granny gowns, etc.) But with his new band REQ’D (pronounced “wrecked”), we get to hear the monster behind the mask.

The music isn’t nearly as ferocious as The Grannies’. In fact, Sluggo even strums an acoustic guitar in some songs. Several tracks feature female background singers (Mrs. Sluggo — Laurian Rhodes — is one of them). And while Grannies songs are typically funny (and frequently obscene), Sluggo bares his soul on many of these tunes. “Cancer,” for instance, is about his young son who survived leukemia.

But don’t think the album doesn’t rock. His electric guitar on the opening song, “Blood,” should dispel any such notion, especially the feedback freakout at the end. Thomas Quinn’s wild sax on “Trash” reminds me of Steve Mackay’s work with The Stooges. And “Car” is funky in a swampy kind of way.

Sluggo wrote all the songs here except three covers: Nick Cave’s “The Ship Song”; “Don’t Let the Sunshine Fool Ya,” written by Texas troubadour Guy Clark; and a surprisingly good — and unironic — version of Bonnie Tyler’s cheesy ’70s hit “It’s a Heartache,” on which Sluggo shares vocals with Hilary Reed.

First, a live radio set by The Mystery Lights