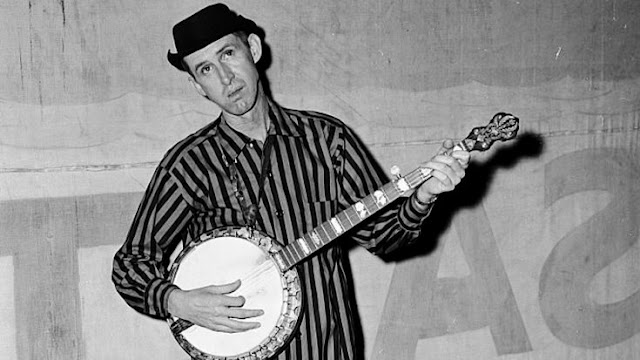 With his long nightshirts and low-hanging pant, belted around the knees, his funny hat, his deadpan face -- and a truly dangerous banjo --  David Akeman, who most people knew as "Stringbean," was a comic star of the Grand Ol' Opry from the '50s through the early 70s.  And he was part of the original cast of Hee Haw, which introduced him to a new generation of hillbilly music.

Following a performance at the Opry on Nov. 10, 1973, Akeman and his wife Estelle were shot and killed killed at their cabin in  Goodlettsville, Tenn. near Nashville by a couple of burglars looking for a big stash of money they -- wrongly -- thought was there.

But I don't want to dwell on his murder, which has been well-covered elsewhere. This is Wacky Wednesday, so let's remember his music and the laffs he gave us.

Here's an early TV appearance with none other than Earl Scruggs on second banjo.

Everyone got the hillbilly fever by now?