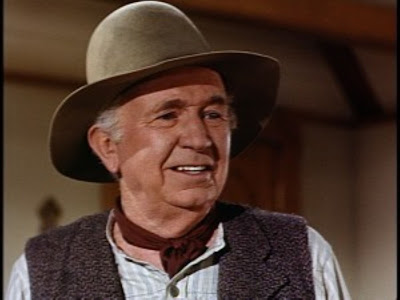 Dag nabbit, it's Walter Brennan's birthday! He was born 125 years ago today in Lynn, Mass,

He was one of the country's best -known character actors starting back in the 1930s, winning his first Oscar for his role as Swedish lumberjack Swan Bostrom in a film called Come and Get It.

He's become best-known for being the crusty sidekick of cowboy heroes like Gary Cooper (The Westerner and others) and  John Wayne (Rio Bravo and others). And I first knew him as Grandpappy Amos in a TV sitcom, The Real McCoys, which ran from 1957 to 1963.

But he also was a recording artist, a pioneer of white rap (or maybe, in Brennan's case, we should call it "clip-clop" music

Here are some of his tunes:

Mel Tillis wrote it, Kenny Rogers made it a hit. But Walter nailed it: