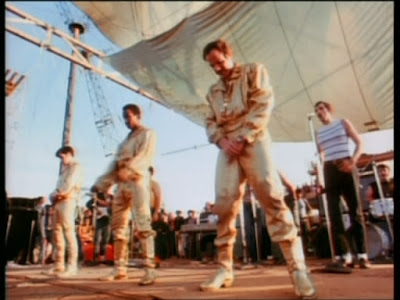 Amidst all the recent hoopla of the 50th anniversary of Woodstock  I can't help but think of the band that The Dead Milkmen declared to be "the kings of Woodstock": Sha Na Na.

You know it's true deep in your heart!

Lyndsey Parker, Yahoo News' music editor, must have been thinking along the same lines in an article published yesterday (Thanks Sean H. for pointing me there.):

..the kitschy ‘50s revival act, who’d originally formed as an a cappella group at Columbia University in the late 1960s at the height of hippie counterculture, and had only played seven previous gigs, were unlikely breakout stars at Woodstock ’69 — after the virtual unknowns secured a prime slot right before Hendrix’s weekend-closing set.

I've been a long-time fan. When I went on my cross-country hitchhiking trip in the fall of 1973 they were an important part of the soundtrack.

Somewhere outside of Madison, Wisconsin, I got picked up by three fools from Connecticut in a VW Bus they called Lightnin’. The Lightnin’ boys were like me: out on the road to glimpse Kerouac's vision before things started changing too much.

We traveled together several days, had a great time, got chased out of South Dakota from a little drugstore town. Back on that first night, traversing southern Minnesota at night, we had dinner at a truck stop and purchased two 8-track tapes: Rock 'n' roll Is Here To Stay by Sha Na Na, and There Goes Rhymin' Simon by Paul Simon.

And just a few years ago I got to interview Bowzer from Sha Na Na for a column I wrote during a session of the Legislature. (He actually joined the group after Woodstock.)

Here are some videos from Sha Na Na's short set at the Aquarian Exposition. (I used to perform this song myself as part of my "Teenage Death Medley" (along with "Tell Laura I Love Her" and "Ebony Eyes.")

Nothing can stop the Duke of Earl

This is the clip from the Woodstock movie that made Sha Na Na famous:

And this is the greatest tribute to Sha Na Na

Remember these wise words of wisdom:

You can move to Montana
And listen to Santana
But you still won't be
As cool as Sha Na Na!